During the fourth weekend of November 2013, the stars came out in Macau. American singer Alicia Keys played to packed houses on Friday and Saturday nights. Philippine boxing legend Manny Pacquiao fought Brandon Rios on Sunday morning – primetime Saturday for U.S. pay-per-view – in front of 15,000 fans. A-list celebrities including David Beckham and Paris Hilton in the audience lent even more buzz to the weekend that had Macau in the global spotlight.
It is a buzz Macau hopes to reproduce more often in the years ahead. New Cotai resorts under construction are all expected to include entertainment venues, from intimate theatres to vast arenas.
It is a move straight out of the Las Vegas playbook, where shows featuring big-name acts have long been a staple, evolving into elaborate stage productions for resident companies, plays and performers. It is also a move long urged by local and Beijing authorities, in order to diversify Macau’s tourism offerings beyond gaming, and transform the city into a “world tourism and leisure centre”.
However, that fabulous weekend in November notwithstanding, Macau’s record on entertainment is spotty.
Melco Crown Entertainment Ltd’s “The House of Dancing Water” stage spectacle and its cabaret-style “Taboo” show, both resident fixtures at casino-resort City of Dreams, have given the gaming operator an identity as an entertainment trendsetter. Across the street at Venetian Macao, Cirque du Soleil production “Zaia” closed in 2012 after a lacklustre three-year run in its own costly, purpose-built theatre. Global headliners such as Usher have also failed to fill the property’s Cotai Arena, reportedly even with many tickets given away.
Macau already has underutilised entertainment venues, both in resorts and around town, so it is natural to wonder why it needs to build up to 10 more.
“Casinos build arenas to enhance their offerings and their marketability,” architecture firm YWS International global director of design Mike Stewart says.
“If they have the appropriate venue, they can bring in headline acts and events that draw attention to the property in general, not just for the event night but also prior to and after the show,” says Mr Stewart, whose firm has an office in Macau and works regularly for casino clients. “There is obviously the benefit of having the number of people required to fill the seats of an event, but just as or even more important is the headliner’s brand being tied to the brand of the casino.”

Traffic jam
“It’s all about the traffic to and from the theatres and arenas, and the traffic before and after events,” Cuningham Group Architects Inc principal Thomas Hoskens says. His firm has been involved in several casino and arena projects in the United States. The company is currently designing a new arena proposed for the Las Vegas Strip.
“When quality acts and performances are successfully booked, large crowds are being drawn in and have the tendency to eat, drink and gamble before and after events,” Mr Hoskens says.
Those crowds tend to spend at the resort hosting the event: Venetian Macao reportedly registered US$155 million in revenue during the Pacquiao-Keys weekend.
“Sands China Ltd’s multi-tiered entertainment strategy is aimed at diversifying Macau’s tourism economy through the varied offerings of its Cotai Strip Resorts Macao integrated resort city,” says Nuno Lopes, assistant vice president of entertainment at Sands China’s subsidiary Venetian Macau Ltd. “Macau now has a lot of non-gaming on offer to visitors besides gaming.”
Sands China operates the 15,000-seat Cotai Arena, where Pacquiao fought, and the 1,800-seat Venetian Theatre, where Keys played, both at Venetian Macao. It also owns the 650-seat Sands Theatre at Sands Macao on the peninsula. The Parisian Macao, scheduled to open late next year in Cotai, will include a 1,200-seat performance venue.
“In adding these differently sized venues, we are able to accommodate different productions,” Mr Lopes says.
Sands China’s rivals are also building new show venues. Galaxy Entertainment Group Ltd says its Galaxy Macau Phase 3 expansion will include a 10,000-seat arena and two theatres, expected to open in 2016.
Macau Legend Development Ltd has included a theatre in its Fisherman’s Wharf redevelopment. SJM Holdings Ltd says it is not ready to disclose details about entertainment offerings at its Cotai casino-resort.
Other operators did not respond to Macau Business about their Cotai resort plans, but all have indicated entertainment will be an important part of the mix.
Wynn Macau Ltd chairman Steve Wynn said in a 2012 Macau Business interview that the company’s Cotai resort would include a theatre. Last October, he announced the 15,000-seat Wynn Diamond Coliseum in the Cotai project’s second phase.
Melco Crown’s Studio City casino-resort, opening next year, plans a 5,000-seat arena, according to a 2012 stock market filing. MGM China also promises more entertainment venues in its Cotai property, scheduled to open in 2016.
“They’re building theatres to ensure that, within their own properties, there are comprehensive sets of facilities for non-gaming activities,” University of Macau gaming expert Ricardo Siu Chi Sen says. “This may also be one of the measures casino operators see needed to remain competitive in the market, as well as to be supportive of the government’s interest to develop Macau as a world tourism and leisure centre.”

Dark nights?
Building venues is easier than filling them. Mr Lopes tells Macau Business that Sands China’s current venues last year hosted about 70 live entertainment events covering 96 booking days with attendance of more than 360,000. Impressive numbers, but still less than one show for every weekend night of the year, leaving venues vacant most of the time.
More entertainment venues may simply produce more dark stages.
“Macau may be overbuilt initially,” concert promoter International Sound and Light Ltd managing director Scott McLean says. “But there’s no way it won’t develop.”
Pedro Lencastre, head of programming and marketing at the government-owned Macau Cultural Centre, does not see any negative impact from additional theatres and arenas. “An increase of venues, similar or otherwise, would come along with a character boost for each venue. That is, each venue would identify the need to specialise in its own programming, differentiating itself from others,” he says.
Nonetheless, growing pains loom. “Having to fill too many venues can water down the quality of the options,” Mr Hoskens says. “Anyone can have a theatre but you have to fill it with quality entertainment to really draw the crowds. Quality, relevancy and popularity definitely matter.”
With completion of the Hong Kong-Zhuhai-Macau Bridge, Mr McLean forecasts Macau can supplement the tight supply of performance sites in Hong Kong. But international touring acts consider both cities secondary markets to fit in around regional anchor dates in Australia and Japan, he adds.
Finding acts that appeal to even the combined market will be difficult, Mr McLean, who is based in Hong Kong and works throughout the region, contends.
“When it opened, Venetian tried Western acts and that didn’t work well,” he says. “They’ve gone back to it a bit, mainly in the [Venetian Theatre]. It’s hard to do a Western act in a stadium in Macau.”
On the other hand, Korean and Greater China pop acts do well here.

Widening the net
Adding to the inventory of entertainment venues is not only about serving the current market, but expanding it.
“Another reason casino-resorts want to build their own arenas and theatres is that it gives them the ability to attract different market groups that may not otherwise visit the property,” says Mr Hoskens.
Empty venues cost money, both in terms of maintenance expenses and the opportunity cost of space that could be put to more lucrative use. But gaming revenue gives operators the flexibility to wait for the market to emerge.
“Casinos can afford to put [venues] in, and if they go empty for 90 percent of the time, it won’t break them,” Mr McLean says.
None of the operators gave Macau Business any numbers on their rate of return for entertainment venues.
“It’s not a matter of return on investment for construction cost, but it’s a matter of driving and differentiating the guests that come to the property,” Mr Hoskens says.
“A lot of entertainment venues are considered loss leaders and are not expected to be profit centres in a casino-resort environment. The gains of a theatre or arena come from foot traffic generated for all the associated amenities combined.” Entertainment events also give casino-resorts additional opportunities to promote their name without mentioning gaming.
In Macau, there is added impetus for building entertainment facilities from the government, as part of its drive to diversify the tourist economy beyond gaming. The gaming table cap limits the logic of building ever-larger casino floors, though gaming operators can get additional table allocations if they build more non-gaming amenities, officials say.

“Building entertainment facilities absolutely has to do with gaming table limits and the government’s desire to expand offerings beyond just gaming,” Mr Stewart says.
“The return on an arena or theatre is nothing compared to gaming, so from a strictly return-on-investment perspective there isn’t much of a case to be made for a theatre. That said, when you look at the expanding global market – Singapore, Japan, Russia, to name a few – and the integrated resort-type destinations that have been or will be created, Macau is smart to consider how the future will evolve and the need to stay competitive.”
Mr Siu says: “I don’t know if the attempts by some operators to invest in arenas or theatres are mainly for showing cooperation with the government and trying to get more tables or not. In practice, this inference seems logical.
“On the other hand, non-gaming attractions may also be important elements to ensure the competitiveness, hence sustainable growth of Macau’s integrated resorts in the long run.”
With so many new venues under construction, one thing is sure: in Macau, the shows will go on. 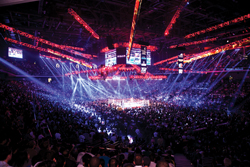