Skill Gaming: the next step for slots

Casino International > Features > Skill Gaming: the next step for slots 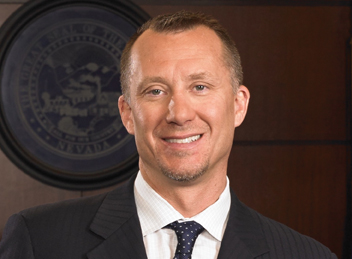 Casino International talks with AG Burnett (Pictured right), Chairman of the Nevada Gaming Control Board, about the recent law changes in Nevada that will allow slot manufacturers to incorporate skill-based elements into their products; this will hopefully appeal to a younger slot player, potentially an entirely new player base.

Casino International: You recently made comments about an element of skill-based gaming coming to slots. People that have grown up with consoles are now in their 40s and they want more for their leisure dollar than a simple button push, I think the market is more than ready for this – and recent launches like Zuma, Plants vs Zombies, and Bejewelled suggests the slot manufacturers know it too.

AG Burnett: Yes, some recent titles are a theme, not necessarily the actual games; for lack of a better term, a skin over a traditional gambling game.

What we’re trying to do here is change that. We’ve been doing this for a very long time; a guess the longest of any jurisdiction of regulation; we were probably the first.

That’s caused us to have a culture here – not just in the state of Nevada, but within the Gaming Control Board itself – of looking ahead.  While we regulate gaming in Nevada day by day and hour by hour, we also regulate it year by year with an eye towards the future.  And I think it’s incumbent upon us here to recognise trends and things that are coming down the road, and sometimes those things materialise and sometimes they don’t and I think a good example of it was Internet gaming.

When we finally decided as a state that we were going to regulate and allow for internet gaming, it wasn’t something that just occurred overnight that we had to get ready for on a moment’s notice; this was something that we’ve been looking at for at least ten years internally.

And the same thing goes true, I think, for skill based games, or games that we’re calling ‘hybrid games’ here in Nevada, that incorporate both elements of chance and skill.

I think that we have known for a few years that the demographics that visit Las Vegas are changing and that in order to accommodate those demographics for a gaming purpose, you’ve got to make some significant changes.

As regulators our task over last year or two was to understand what types of changes would need to be made, both in terms of our statutes that govern us and our regulations, but also in terms of what is it that people, such as yourself, might be interested in playing in Las Vegas.

And that process really began in earnest in at least a year ago.

I asked my staff in our Technology Division to start looking at what we might do in order to accommodate a new trend as regulators.  And the mandate that we have here was we’re always going to regulate and we’re always going to do our absolute best and hardest work in terms of ensuring that those who come in and are licensed to offer these games to our public are suitable and qualified and are adept from a technological standpoint and to offer games that are fair and honest and keep our reputation as a gambling state as high as it can.

So, not pushing out our traditional slots by any stretch, because there are people who love playing them, but opening up our, I guess, our spectrum of things that we will allow onto the floor so that you don’t just have a slot game that has a skin from a popular game or app that you play on your iPhone, to actually allowing more of those skill-based games to be on the floor with some kind of monetised element, if at all possible.

CI: There are some manufacturers whose machines look and play like a hybrid game already, and we see their titles all over the world, and they are full; the demand is clearly there and waiting for something new, something more. Often legislation is a long, long way behind demand and so anybody that’s trying to pre-empt that, I think, deserves a little round of applause.

AGB: I think you’re absolutely right in terms of legislation being behind and that’s one of the things that’s caused us to move so quickly this year because our Legislature in Nevada meets every two years, so by the very definition we’re two years behind and I give kudos to our governor and to our Legislature for recognising the importance of what we did in our legislation session this year which went from the very beginning of the year to June. We went in collectively as a group of government and industry to say, ‘Change the law, open it up, allow the regulators and the industry to craft regulations that are broad,’ and the Legislature listened and they did that.

So they opened up the enabling legislation for us as regulators and industry to now start crafting regulations, which are more easily changed and more easily manoeuvred to get what everybody needs to get.

I would rather have done that than be behind the curve and not make the statutory changes and wait until our Legislature meets in 2017.

CI: Quite simply, is that the next step then? Just forming the legislation?

AGB: The legislation was passed in the 2015 Nevada Legislature and it was a statute; that is what I call ‘enabling legislation’ that says to the regulators, “Go forth and open it up and here’s your mission, and start drafting regulations.”

And so yes, one of the Legislatures convened and finalised the session.  Once that occurred we began, the Gaming Control Board, to craft regulations.

In the valley you’ve got two sets of laws essentially for gaming.  One is the statutory set which the Legislature creates and then the second is the regulatory set which the Gaming Board and Gaming Commission create and that’s where we’re at right now.  We’re doing regulations for skill and hybrid games as we speak.

CI: How long do you think this will take?

AGB: To ballpark the regulatory process, I think the process will be complete by hopefully November.

CI: That is pretty quick.

AGB: Then the regulations will be on record and the manufacturers will know what the playing field is for what they can produce. And it would be my hope that we could start to see games in the independent test labs, GLI and BMM are the two Nevada independent test labs, so we’ll be testing the product.  I hope that they’d be able to start seeing new ideas and new games by December.

I can’t speculate on the test process itself because it’s dependent upon the game or the gaming device and what it is and exactly what the test labs have to test for. The way it works in Nevada is the test labs will receive that submission and they will go through their testing requirements to certify it to Nevada standards.

Once that’s accomplished, whether it takes a month or three months or however long, then theoretically the game will come to our Nevada lab in our Technology Division and we usually have a several week process of review and then it goes to a field trial, which is the, I guess you could call it, the [data] testing of the product in a large casino on a trial basis and usually the field trials take a few months.

And after that the board hears from the casino location where it was trialled, from the maker of the game, and from our own lab and then we approve it in full after that.

It is quite a regulatory process and we have not done away with that by any stretch, but it will allow for new games to be on the floors, hopefully, by the time you and I talk about this next year.

CI: You’ve surprised me a little bit with the speed at which it’s moving at your end; that’s terrific and, to be frank, makes a nice change. This is genuinely exciting; casinos and manufacturers are going to have to be very canny in how they market to a whole new player segment though.

I think the second type will be the one that says, “Oh, I’m going to try this and see what it’s all about and who knows where that will lead.”

And then of course the third type will be the entirely new category which is the people who you spoke of earlier, the people who are of a younger generation who are 21 say to 35/40 age range.  It will be interesting to see what the manufacturers come up with to appeal to them because that’s an entirely new market and, in a way, the market’s there, but also the manufacturers, I think, would be well served if they realise that they can create markets now.

I would hope, at least, that there are indeed departments that are excited in terms of the creativity they might be able to start utilising.

CI: You could actually have a story-based RPG with a gambling element that can be integrated with an online presence – legislation allowing – where a player can then pick up the story at home on their portable gaming device or whatever… This is potentially absolutely huge when combined with existing technologies.

AGB: The idea in that context would be, just what you’re saying I think, have the RPG at home and utilise that to bring people to the casino to Las Vegas for the monetised gambling portion or whatever it may be; the sky’s the limit in terms of creativity.

CI: No pun intended, this is a game changer.

AGB: Well that’s exactly what we intend it to be and I think that, of course, bureaucracy aren’t extremely fast and they’re not always willing to jump on a ledge and take huge risks.  I think we’ve taken the risk that we feel comfortable with.  I think we’ve moved as fast as we feel comfortable with.  I’m hoping that it will be the game-changing event that causes a change in Nevada in terms of appealing to the customers who are visiting in record numbers. They’re not playing slots in record numbers, but they’re visiting Las Vegas in record numbers and they’re interested in dining and nightclub entertainment and all kinds of other types of things and gaming and the idea is to offer them that new gaming product while they’re there.

CI: This comes down to what the manufacturers do with it, what the designers do with it – if they grasp the nettle, if they get it, we could be looking at a golden age with whole new players appearing; all-new player groups and demographics and all kinds of really interesting marketing potential.

AGB: I think Las Vegas is a good test. It will be seen as a good test for this because we also have a wide variety of operators and of course it’s entirely incumbent upon the operator to allow the game on the floor and I think you’ll see a spectrum of operators as well, kind of like the slot player; some who just don’t have an interest in embracing it, and that’s fine; and others who do and embrace it maybe even more so that the traditional slot model.

So, that will be interesting too.

The Need for Speed with eGaming
One year on…Novomatic