It’s a familiar lament from the casino manager, customer and mystery shopper – I inhabit all three roles – that service standards simply aren’t good enough in the modern casino world. This is usually a complaint uttered in the same sentence as how good things used to be in the old days, particularly in the UK market, and in my opinion this isn’t without some truth – it seems to me standards in general have taken a nosedive, even out in Las Vegas. There was a time when it was very rare to have a dealer in the Nevada gambling mecca who was anything but chipper and super friendly – sometimes punchably so – but more and more these days the sullen looking sourpuss seems to be invading the floor.
So why is this, and what can be done about it? Well, speaking for the UK in particular, a lot of it has to do with the age of the staff. As wages have fallen in real terms, the age of the average dealer has fallen with them – and youngsters tend not to have developed the interpersonal skills at 19 that they may have when they’re 25.  It’s also part of how young people live their lives, and this has always been the case – to an extent many just don’t recognise the value of a positive service experience. It may sound like a blanket statement, but the type of horrendous, sullen, silent service you might get at your local cinema just doesn’t even register on the radar of many youngsters as an issue, so it’s that much harder to try to convince them to engage with players, or even understand that customers have needs other than the next spin or hand.
You also have the problem of one or two longer serving staff members sticking around, while ostensibly hating the job. Every casino seems to have one or two team members who will complain at length about how they never made it to management as “their face doesn’t fit” while simultaneously developing an air somewhere between insouciant disregard and outright hostility towards the players. Ideally you’d move such people on, but it can seem disloyal to eject long serving team members, and might even have a disproportionate effect on morale – it’s a tricky balance.
In terms of what can be done about it – well, as a consultant I’m supposed to say hire me and I’ll sort it out for you! I’m afraid that’d be a lie, however – organisations far more specialised than mine have tried to solve this issue very much with mixed results. Operators that have really cracked it – Disney spring to mind – spend an inordinate amount of time focussing on service, and it simply might not be cost- or time-effective in a casino environment to go to the extent needed to approach perfection. Roleplay and similar exercises can help staff understand why it’s important, but an environment such as we have had recently with pay freezes, retrenchment and belt-tightening in all departments is not necessarily conducive to happy smiling faces.
The most effective real solution is simply, in my opinion, to lead by example. The increasing trend of management spending more time in the office than on the floor can tend to dissuade staff from making the effort to go beyond their functional duties. The simple fact, in my opinion, is that people left to their own devices tend not to do their job unless they are supervised, whatever level they are at. Leaving the staff to work with minimal supervision is pretty much guaranteed to lead to minimal extra effort to please.
There are sites where service is still outstanding – one example that comes to mind is the Hippodrome in London. However, that level of service does not come without a cost – their management and supervisory presence on the floor is notable, and very visible. It probably also helps that they’re still bathing in the afterglow of a new business, without too much of the world weariness that comes with operating in an irritant-rich environment (ie cranky, drunk and unreasonable customers) for year after year. It’s also fair to say that focus, by definition, means prioritising one thing at the expense of others (try focussing your eyes on two things at once if you don’t believe me) and, as with any casino or other business, there are always plenty of challenges competing for attention.
Overall, my view is that the main reason we, as an industry, are relatively poor at customer service is simply because it’s really, really hard to deliver it consistently, a fact underlined by all of our collective experiences during everyday interactions in all walks of life. There’s no Holy Grail, and while all the courses and roleplays you like will help, nothing works quite as well as leading by example and hour to hour attention and coaching. Does this justify the expense and effort required to get things right in a Disney-style way? It’s certainly arguable, and subject to diminishing returns, but the nature of diminishing returns implies the first efforts generate the best results, and seeing the dearth of management on some casino floors suggests not even that effort has been deployed. 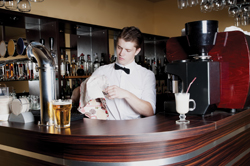 Changing times
Comtrade: ICE and beyond