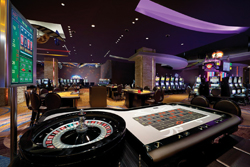 Well, what can I tell you? It’s just a couple of weeks before the start of the London Show, and the advanced weather forecast shows temperatures between 2 and 9 Celsius for London during the ICE Totally Gaming 2013 week. What is for sure is, if not fur coats, its definitely time for some weatherproof cashmere coats.   As we write this January we have been dealt a cold hand with snow and frozen conditions, which has brought its fair share of train and flight cancellations.
Truly, it has been a funny January as the Show has moved dates and location. However, over three full days, 5-7 February, ICE Totally Gaming 2013 will be the largest and most comprehensive trade event in gaming. Every gaming sector is represented at ICE, from betting, bingo, casino, lottery, mobile, online and social to street gaming.
Nonetheless, what has caught people’s imagination this year is the Caribbean Show, CGS 2013, set in beautiful Dominican Republic at the all-inclusive Hard Rock Punta Cana Hotel & Casino, where everything is at hand and included in the deal, from Michael Jackson concert and Merengue and Salsa shows to your own unending bar in your ample suite; and as the event ends each of the three days with a party, all I can say is, see you there!
Cheers,
Ricki.

Jaime Wilhelm, Dreams GM, said: “The Peruvian market is growing a lot, and if we are going to invest in this market, it is obvious that we come do so as a significant operator. We like Peru a lot because of its high growth rate and a market that in sound gaming terms has great potential for further growth; and on the other hand the country enjoys very well defined legislation and gaming is superbly regulated.”

Negotiations between Dreams and the Zalaquett family, owners of the Peruvian casino lasted about nine months and ended in a US$24 million deal that is subject to the usual institutional approvals. Dreams is controlled by brothers Claudio and Humberto Fischer and Citigroup Venture capital who share 51 and 49 per cent of the equity respectively.

GES LatAm 2013 in Panama
Gaming Executive Summit LatAm 2013 is the premier event in Latin America where the region’s key executives from offline and online operators gather to discuss new strategies and business models for success. The conference will take place on February 27 -28 at the Trump Ocean Club International Hotel and Tower, Panamá City. Over two content-packed days operators will gain real examples of how to profit from Latin American gaming.

Gaming Executive Summit LatAm 2013 provides a platform where strategies and investment opportunities can be explored, profitable contacts can be made, and operators can gain valuable insight on new gaming opportunities in Latin America. The third annual Gaming Executive Summit LatAm is the premier event for land-based and online gaming operators and regulators entering and growing their market share in Latin America.

ELA 2013 is postponed
The organisers of ELA – the International Gaming Expo, have announced that the forthcoming edition, initially scheduled for 15 and 16 May 2013 in Mexico City, will be postponed. In all probability, it will be replaced by an event that would include an international gaming congress featuring keynote speakers from leading industry names, along with a salon for leading manufacturers to showcase their wares. Events of this kind are already being organised very successfully throughout Europe.

After consulting with several leading figures from the sector, the organisers took the decision based on a series of reasons. The first is the uncertainty of the political situation in Mexico, after a new government led by Enrique Peña Nieto took over on 1 December. PRI, a centre-left party, replaces Felipe Calderón’s rightist PAN party. This means that the country in general, and gaming in particular, can expect some drastic changes and it is well to be alert.

The SEGOB, or Mexican Home Ministry, responsible for all gaming in the country, has prioritised the fight against organised violence in Mexico, and the subject of gaming barely merits a mention on the agenda of the new minister, Miguel Ángel Osorio Chong. Moreover, the serious repercussions of the boycott of the most recent edition of the fair by APJSAC, one of Mexico’s two major associations of gaming operators, are still being felt.

“In view of the situation, we have decided that it may be better to take a sabbatical, and leave ELA for another year”, explained an ELA spokesman. The dates for ELA 2014 have already been booked – 14 and 15 May.

CGS 2013 at the Hard Rock Punta Cana Hotel & Casino
The Caribbean Gaming Show & Summit 2013 is set to gather the top industry players at its fourth offering and this time the event has selected a dream setting, the Hard Rock Punta Cana Hotel & Casino. This year the event has a 3-day programme that includes a Golf Tournament on March 12, followed on days 13 and 14 by conferences, products expo, networking luncheons and partying in the evenings, as only this superb all-inclusive venue is able to offer, with swimming pools and beach thrown in.

The CGS 2013 is supported by Gaming Laboratories International (GLI) on the conference and institutional side in an event to feature Caribbean regional regulators in a working breakfast where the latest ideas and development projects are surely on the agenda.

The Caribbean event is sponsored by Betstone, Ainsworth, Aristocrat, GLI, Nevada University, the Dominican Republic Casino Association, MEI Group and Adictel as Platinum sponsors, and has listed a large number of exhibitors and participants that will rank the CGS as the leading event in the region.

There is a full list of activities at the event where visitors will have the opportunity to network with other industry professionals, participate in the Summit, take part in the ULV International Gaming Institute courses, and also enjoy myriad activities available to delegates at the Hard Rock Punta Cana Hotel & Casino, the major Caribbean all-inclusive resort.

The CGS has developed into a singular event enriched by its years of progress and organization. Continuous gaming growth and development in the Caribbean has enabled the CGS to act as the support engine to gather industry leaders and diverse governments in search of strategies to work in a regulated climate that guarantees investment in the gaming markets.

Access to new technologies and the growth of online gaming have opened up a new niche of great interest to local manufacturers, as well as businesses that focus solely on remote gambling products. In view of this, this fourth edition of CGS will be dedicated to eGaming to support the immense products on offer within a regulated environment that guarantees security in the gaming and betting segments.