There are few countries in the world with an excellent level of gaming regulation, and surprising though it is, it is a matter of great compliment see that in Latin America, Peru’s regulator Direccion General de Juegos de Casino y Máquinas Tragamonedas – DGJCMT (Spanish acronym), under the direction of Manuel San Román has become the most effective regulator in the region.

Soon after publishing the comprehensive DGJCMT report for compliance of the local gaming sector on money laundering and online control on more than 80 thousand slot machines in a country that spans over lowlands, highlands and part of the Amazon Jungle, San Roman was busy in his Lima office working on the Peruvian regulator’s next project promoting responsible gaming in the country, when we met to talk about gaming in Peru.

RCM: I expect that the climate problems in Peru because of the el Niño complex phenomenon has affected the game sector in areas that suffered most destruction. Could you tell us how as the DGJCMT reacted to the problems in those areas?

Manuel San Román: “This climatological phenomenon known around here as “El Niño Costero”, as has been reported by the media, has affected Northern Peru with greater impact, and activity in gaming has not been an exception, and while, as it can be verified from DGJCMT records gaming activity was only interrupted in five gaming halls, located in the cities of Piura, Lambayeque, La Libertad. “However, the material damage caused by El Nino in these locations has been very large, and because of this DGJCMT has been facilitator and coordinator to assist with the arrival of donations made by casino and slots operators from all regions of Peru.”

RCM: We understand that there is a legislation project to regulate gaming and sports betting over internet. What is the current situation on this issue?

Manuel San Román: “Perhaps one of the most important challenges that the DGJCMT faces at present is working on legislation to regulate online gaming and sports betting. The legislation project, which is in the final stages, will address the competent authority for regulation, control, authorization and supervision of online gaming, as well as payments of the corresponding gaming tax.

“We consider to be one of DGJMTC’s great strengths, owing to its experience in the casino and slots activity, that already is in possession of essential knowledge, experience and qualified personnel to take control of regulation of internet and sports betting gaming. Is for this that this organization should be constituted as a governing body and consultant in the overall delivery of gaming.

“At present, the online gaming legislation project is ready and in the validation stage before it continues on the corresponding due processes.”

RCM: It is public knowledge that there are companies operating and making money in online gaming and sports betting in Peru in the absence of appropriate legislation in place. Are any of these companies based in Peru and reporting their activity business to tax revenue controllers, SUNAT?

Manuel San Román: “Indeed, it is true that there are companies that already operate those activities either based in Peru or overseas. However, few of them are legally constituted in Peru paying taxes as they should, which is SUNAT’s responsibility to ensure due payment of them.

“On the other hand, there are other companies that operate online gaming without having been incorporated in the country and consequently do not pay taxes as they are incorporated in other countries. Needless to say the Peruvian Government is not able to exercise control over them. No doubt, this situation will be corrected with the appropriate regulation and control will be exercised over them.

“It is for this reason that there is concern not only on DGJCMT’s and MINCETUR’s to regulate online gaming, but also from the State itself, because the current situation is unfair competition to regulated gaming and in addition there is the question of tax evasion as such companies’ profit from not paying their tax obligations without regulatory control mechanisms, and protection of vulnerable groups of the population in place.”

Manuel San Román: “The activity of casino gaming and slot machines in land based operations has undergone a full immersion process and is one of the first to be fully aligned to the ‘Prevention Against Money Laundering and Financing of Terrorism – that is to say that to date all of them have assigned compliance officers, file in reports of suspicious transactions, run a Registry of winners, register operations that exceed the threshold provided under regulations, among many other regulations in place.

“To date there is no knowledge that any companies belonging to or linked to the gaming industry in Peru are being investigated by the Commission of such offences. Nonetheless, we carry on observing regulation and controls in compliance with Peru’s Financial Intelligence Unit and work closely together with this organization to verify full compliance of the obligations by the persons in charge of reporting that suspicious or unusual operations in gaming rooms are duly observed. And we are extremely careful to ensure that what we are trying to avoid is that the land-based properties are not used as vehicles in money laundering and financing of terrorism.”

RCM: What is perception abroad of great work that DGJDMT is doing on FAFT in Peru? 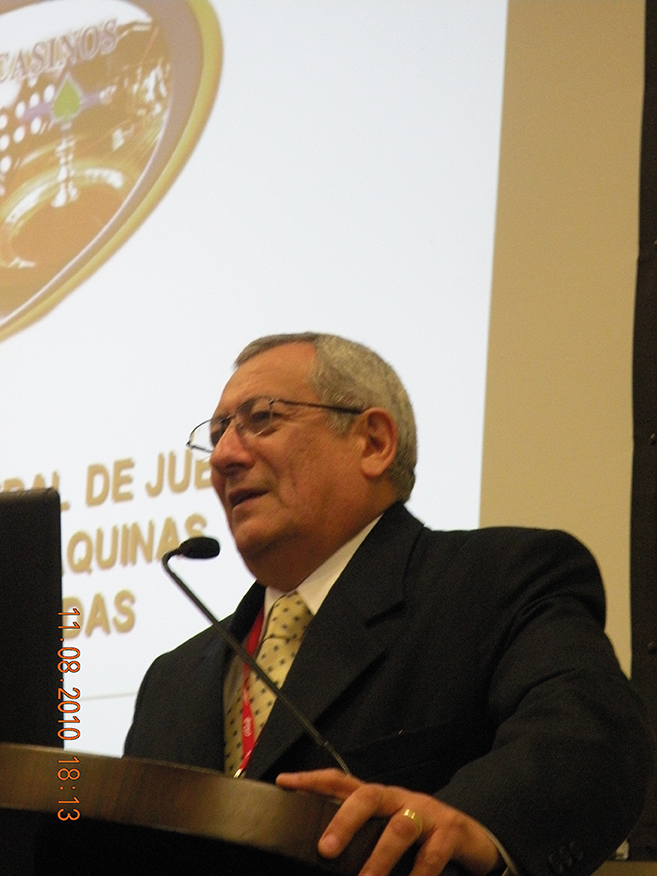 Manuel San Román: “it is always important for Peru to have international recognition on the matter of regulations and control the casino and slot machines activity, and this was a case in point at the IV Ibero- American Gaming Regulators Summit, which was held in the city of Cartagena de Indias – Colombia, where the conclusion was reached that Peru was an example to be followed in relation to land- based gaming after tremendous work against illegal and informal gaming from unauthorized operators. Also, we have achieved online interconnection in real time of all slot machines for control by MINCETUR and SUNAT; set up responsible gaming policies; workable action against problem gambling, and especially set up the system in compliance with international demands for the prevention of money laundering and financing terrorism, which is something that we are totally committed to and severely demanding.”

Manuel San Román: “Currently we have knowledge of important projects in the tourist business, which would incorporate within its offerings development of casino operations and slot machines with investment of up to 300 million dollars.

“What such investment or investment projects do is to ratify the good moment that the gaming sector in Peru is going through at the moment, and I might add, that the industry has been consolidating its position year after year and has become a point of reference in the Region.

“What is important however, is to not only the interest of Top Tier companies that seek investing for the first time in Peru, it is also important that the investment that has already been made in Peru by other companies a few years ago and is operating have already consolidated their investments and now are looking towards new significant investment projects”.

RCM: Finally, how you anticipate the development of online and sports betting in Peru in the next couple of years?

Manuel San Román: “The growth and development of land based and virtual sports betting has set the agenda of regulators around the world, and this region is no exception, as has been demonstrated in each of the international forums or gaming events where we have participated.

“According to information that in the hands of DGJCMT, there are estimations that in the year 2016 there has been more than 1,120,320,000 Peruvian Soles (approx. US$373M), and we have no doubt that this number will grow when regulation is in force, as other companies, some of which have already paid a visit to us say that they will only operate when regulation is in force place, as they seek to compete on equal terms with appropriate rules and regulations.

“Is our task, as regulators, to make every effort to ensure that this activity is conducted with honesty, transparency and equal conditions for all; especially with proper protection to vulnerable groups of the population and taking care that the activity has full provisions against money- laundering and the financing of terrorism, issues that must be firmly legislated in a sensitive activity such as gambling”.

The kids are alright
Voting is open for AGAwards 2017