The future of… SLOTS 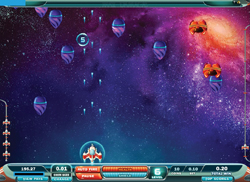 Slots have been around for over 150 years and remain one of the most accessible forms of gambling. They don’t require players to understand complicated betting strategies or optimum decision pattens to get the most out of a game. All players have to do is hit a button and wait for the reels to spin. This doesn’t mean that top gaming development houses aren’t constantly pushing for new ideas, mechanisms and concepts within the world of slots. They are pushing a huge amount of investment into trying to come up with the next killer app that will define the future of slots.
Gaming mega-companies like bwin.party and IGT are attempting to assault the social media gaming market with products like Slots Craze and the Double Down Casino, bringing Facebook fans play-money slot gaming. They’re trying to take advantage of current reports that suggest there is a high level of correlation between popular social media games like Farmville and Mafia Wars, and slot games. Slots Craze requires players to spend a set amount of time and free playing credits on specific machines in order to unlock access to bigger and better games, while the Double Down casino features many of IGT’s most popular titles including Wolf Run and Pixies of the Forest.
This attempt may look like a futile errand to many. People are incredibly internet savvy these days and due to the massive saturation of gambling advertising both on the web and via more conventional media channels, it’s unthinkable that any user of social media is unaware of online casino gaming. If people want to play slot games they can find these at numerous internet destinations, even if they’re looking to spin for free. The level of production available in many commercial games simply trumps that on offer from the titles on these social media platforms.
That’s not to say that slots manufacturers aren’t developing techniques to bring players back to the reels of their slot machines time and time again. We’ve seen a notable rise in the amount of games that now pack unlockable content, including Playtech’s Sopranos, Microgaming’s Thunderstruck II and perhaps the king of the genre, IGT’s Monopoly Plus. All of these games require players to achieve certain game-play goals which in turn release bigger and better prizes and bonus mechanisms. This seems to be a far more effective method of sticking players to a game’s reels when compared with the effort required to try to tease an audience into a long-standing relationship with your slots through social media.

LOOKING GOOD
Without question the biggest advancements in the slot machine industry have been those that sit right in front of the player’s eyes. Net Entertainment’s Platinum Slot series – featuring titles like Gonzo’s Quest and Elements: The Awakening – are setting new standards with their fully-animated sprites and detailed, sumptuous backgrounds. The industry is also forming alliances with film studios – consider IGT’s Ghostbusters and Microgaming’s Battlestar Galactica. Both of these titles feature huge levels of high definition visual entertainment, backed with rich media animations and film clips. It’s no longer enough for a game to offer a good pay-table and a decent feature, slots these days have to appeal to players on an aesthetic level like never before.
This has lead to some manufacturers trying to create more and more immersive slot machines for their land-based customers. Take a look at the IGT’s casino slot machine The Dark Knight, which has been created to some of the highest standards this development house has ever known. It requires players to sit down cabinets akin to a Japanese multi-player arcade racer, designed no doubt to pin them deep down into the reel action. Of course, such techniques will not translate to the online stage, but with the arrival of products such as Google Glass, one has to wonder how long we will have to wait before we see 3D-augmented reality slot machines, where players can sit inside spherical banks of reels. This could well lead to new reel mechanisms. For instance, special features could offer players the ability to swap symbols from opposite sides of the base-game grid.
However, once all slots have been preened with a high gloss, pristine front end, there’s still the question of back-end innovation to set your good looking game ahead of the rest of the cool pack. One of the most exciting developments we’ve seen in the industry in recent months features on the Gamesys title Secrets of the Phoenix. To all intents and purposes this appears to be a clone of Gonzo’s Quest, borrowing both reel art themes and game-play mechanisms from the popular Net Entertainment title. What it does have that sets it apart from other slots is a plug in sub-game that players can play on a daily basis, picking up free spins and cash prizes.
While this Secrets of the Phoenix add-on might not seem that exciting, when one extrapolates the impact it could potentially have on the industry, the implications are enormous. Consider how such a sub-game could be engineered to fit onto Facebook, tying together the world of social media and slot machines in a much more subtle manner than the brute force imposition of straight casino style interfaces on this resistant audience. One only needs a modicum of imagination to visualise the possibilities of games with sub-mechanisms that exist outside of the online casino environments. This is an area that’s the industry is only just beginning to touch upon – no doubt we will see several attempts via scratch-card style instant win tickets before someone comes up with a best selling concept in this fledgling arena.
One thing that the slots industry is definitely picking up on is the need for more excitement in online slot games. Developers simply can’t rely on players becoming beguiled by the chance of hitting a second screen feature or a free spin round after standard reel action; there needs to be that little something extra to entice players onto the reels. We’re seeing new and inventive reel techniques that are available from the moment you press spin, such as IGT’s Multi-Way Xtra system, which pays out increasing multipliers based on permutations of combinations on the reels. WMS’s Spinning Streak and Net Entertainment’s Sticky Win mechanisms allow players to re-spin individual stop spaces after any winning spin, allowing them to expand small winning combinations into bigger ones. There may be only so much that development houses can do with standard reel arrangements, but they’re certainly pulling out every trick they can possibly think of to push this format to its limits.

SPINNING THE FUTURE
What could we expect slot machines to look like in the more distant future? With the advances of technology and the huge amount of processing power now available to casino games, there is no top -end to the range of visual and audio effects that will become available to developers. Back-end-wise it’s possible to envisage games that don’t even look like conventional slots but still use random number generators to control a player’s outcomes. We’ve already seen virtual dog and horse racing games based on this technology and there’s no reason why we shouldn’t see other sporting contests such as football matches or golf tournaments appear in similar fashion. This could even be expanded to model a pop band’s career and record sales or an army’s performance in the theatre of war, with players receiving payouts for their performance.
Taking slots into the realm of absolute blue sky thinking is more difficult but not impossible. As humanity obtains the secrets of the human mind, slot manufacturers could create games that tap into your memories to create the ideal theme based around the best moments of your childhood. This could create a truly addictive gaming experience that literally played back the most happy and emotionally positive moments of your life as you hit wins on the reels. Taking this a step further, these games could even work to show you what your life could have been like if you’d made different choices along the passage of time. The visual processing units could create new realities based on random number generators that show you what you could have been if you’d only have managed to take that brave, bold gamble in the past. This could in turn be wired back into the sensory part of your brain so you could actually feel the experience as well as viewing it.
One thing we can be sure of is that the slot machine won’t be disappearing any time soon. The fact that it’s now been one of the world’s favourite gambling games for nearly 150 years and is still as popular now as it ever has been is a huge testament to its success. Whatever formats the industry creates in the future, one bet that you will definitely win is that slots will certainly feature in some form or another in casinos a hundred years from now.