The Growth of Mobile Gaming

Europe’s major economies might be slowly climbing out of a recession at the moment thanks to fiscal cuts, decreasing borrowing and, somewhat surprisingly, the mobile gaming industry. According to recent reports, the mobile internet industry is not only generating £73 million per annum for Europe’s top-five countries, but has created more than 250,000 new jobs.

Although £73 million may only be a fraction of the debts racked up by some of Europe’s major economies, it’s certainly a growth industry of which financial experts are beginning to take note. Following a report by The Boston Consulting Group (BCG), the mobile internet app economy in Europe is expected to double in the next four years, with revenues set to hit £182 million per year by 2018.

Thanks to the falling costs of handsets and general improvements in mobile technology, more than 200 billion cumulative downloads have been counted since 2008. Moreover, 100 billion downloads were counted in 2013, with 20 billion stemming from the EU.

Such is the popularity of mobile apps that BCG reported that many of those surveyed would relinquish many offline media products in favour of their mobile connectivity. Of those that would prefer to stay connected, more than 50 percent would give up alcohol and 20% would give up their cars in order to keep their mobile apps. 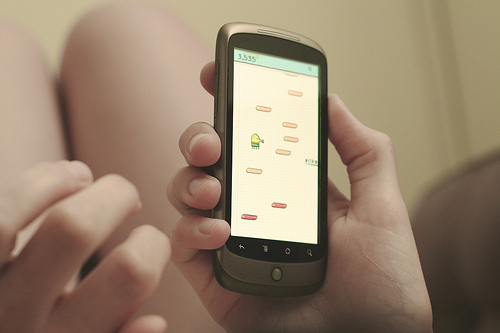 So what does this mean for the mobile gaming industry?

BCG’s report notes that some of the largest developers in the app world are gaming companies, of which casino operators such as betfair are leading lights. Offering both iOS and Android platforms, Betfair Casino and its peers, such as William Hill and Ladbrokes, have become increasingly popular among gambling aficionados over the last two years.

In fact, recent financial reports have shown an upturn in the online gambling industry thanks to mobile casino, poker and sports betting apps. During 2014, Betfair’s share price increased by almost 7% to £14.59. Moreover, revenues during the past 12 months have jumped by 26% and mobile gaming has more than doubled during that timeframe.

Although a contributory factor to this growth was the soccer World Cup, an improvement in mobile gambling technology has also helped boost operators’ mobile gaming revenues. Constantly evolving software has given rise to some of the following benefits:

Greater Accessibility – Mobile gaming apps are more accessible than their desktop counterparts. Because they allow gamers to access their favourite games at any time, it means they’re able to spend more money and, therefore, generate more profits for online gambling operators.

Increased Rewards – An iOS or Android application for casino, poker or sports betting now represent a great way for canny punters to make more money. Due to increased revenues and improved playing conditions, operators are pushing more players to their mobile platforms through additional rewards.

By increasing the range of bonuses players can accrue while they are playing via an app, it consequently becomes a much more profitable option which, in turn, generates more revenue for the company.

More Speed = More Money – Whether it’s players or the operator itself, the increased speed of mobile gaming apps is conducive to a more profitable playing environment. Ever since online gaming became a popular pastime, serious players have been looking for new ways to gamble more in a shorter space of time. Quick seat options, auto top-ups and one-click betting all form an integral part of any major gaming app. This ability to place bets in a more efficient way has led to a greater uptake of mobile gaming apps among serious gamblers.

As the online gambling heads into 2015, mobile apps look set to become an even bigger part of the industry. In tandem with the projected growth of the mobile internet sector, casino, poker and sportsbook apps are only set to improve as technology evolves. These factors, coupled with the gaming public’s increased appetite for easier gaming, means that gambling on the go will likely be the key growth sector in the industry over the coming 12 months.?

Is Macau on the wane for good?
Native American tribes should bet on online gaming