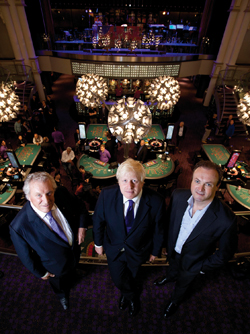 After a 30-month rebuild and renovation of the former Hippodrome Theatre, the new Hippodrome Casino in Leicester Square, London, was launched on July 13th.
The Mayor of London, Boris Johnson, performed the opening ceremony and unveiled a plaque commemorating the occasion.
Mayor Johnson said: “The creation of this superb new entertainment complex in the heart of the West End is yet another ringing endorsement of London as a great place to invest. This huge project has not only restored and retained the glorious fabric of this historic building but also created hundreds of new jobs for the capital and provided a major boost for local business.”
Father and son team Jimmy and Simon Thomas, who have invested more than £40 million in the Casino – housed within the former Hippodrome Theatre and adjacent Cranbourn Mansions – hailed the opening as an important new era for the casino industry in the UK.
Said Simon Thomas, CEO and co-founder: “We will challenge the long-held conceptions of casinos in the UK as either too expensive for the normal man on the street, or tucked away in back alleys in the wrong part of town. In fact we’re determined to not only challenge them, but redefine the way in which visitors to the West End celebrate an evening out.
“The opening of the Hippodrome Casino marks a new direction for the country’s entertainment sector, and we have created 450 new jobs in the process. But it’s not just about the gaming.
“We embody the ambitions of the changes to the Gaming Act which allows venues to offer visitors the opportunity to eat, drink, gamble and watch some of the world’s top entertainers…all under the same roof.”
The Hippodrome Casino comprises:

Said Simon Thomas: “This is a venue whose front door leads onto the busiest street in Europe above Leicester Square tube station through which 40 million people travel every year, and a secondary entrance that leads directly onto Chinatown. We couldn’t have found a better location.
“And we have restored one of London’s iconic buildings to its former glory, reinstating hundreds of original features and bringing back much of the magic of the original theatre built by Frank Matcham in 1900.”
The Casino hopes to attract tens of thousands of new visitors to the Leicester Square area, which has just reopened after a £15 million investment.

THE PLACE
The opening of the Casino marks a new beginning for the Hippodrome.
Originally opened in 1900 by the renowned theatre architect Frank Matcham as a circus variety theatre, the Hippodrome featured a 100,000 gallon tank in which polar bears and sea lions would swim.
Works in 1909 enlarged the stage and advanced the proscenium to suit the theatre for variety rather than circus use and, from 1912, revue-style performances. Harry Houdini performed there and the venue staged the country’s first ever performance of Swan Lake.
In the 1950s the Hippodrome was transformed into the legendary Talk of the Town, and featured stars including Shirley Bassey, Judy Garland and Tom Jones.
After various different reincarnations, including a nightclub under the management of Peter Stringfellow, in 2008 the venue returned to its roots as a circus venue for burlesque cabaret La Clique, which closed in June 2009.

THE GAMING
The casino’s three gaming floors will offer all of the very best in table gaming and the latest electronic games and slots from across the world, including Roulette, Blackjack, Poker and Punto Banco. The main arena gaming floor, with its central bar and full-height ceiling stretching up to the minstrel’s gallery of the original theatre, will offer a particularly spectacular gaming experience.
Up in ‘The Gods’, the Poker Deck will offer tournaments and cash games and on the top floor the VIP room will offer high minimums for those invited. Four private rooms will offer the opportunity for dining and/or gaming in a more private environment. The top floor bar will lead out onto our two open air gaming and smoking terraces – a unique outdoor environment within the casino walls.

MEI’s EASITRAX Soft Count made its European debut when the Hippodrome Casino in London opened in July, exclusively with CASHFLOW SC note acceptors.  Since its release in 2008, EASITRAX has been installed in nearly 80,000 games worldwide – a number that continues to grow as more operators join MEI in the global movement towards optimised cash management.
“We have sought out the latest, most state-of-the-art technologies to multiply returns while also providing the best service to our patrons,” explains John Strydom, Manager of Slots at the Hippodrome.  “We chose EASITRAX and CASHFLOW SC because of MEI’s strong reputation for value and performance.  The global feedback for the marriage of these two products is exemplary, and we’re eager to be the first European casino to take advantage of it.”
“This is a proud moment for MEI,” says James Boje, MEI VP of Gaming and Retail – EMEA.  “It is both an honour and a responsibility that we enthusiastically embrace, striving to provide both products and service that maximise expectations.  Together with the Hippodrome, we are raising the bar for satisfied players and superior cash management in Europe.”
First introduced in 2002, CASHFLOW SC redefined the role of note acceptors in operator profitability and customer satisfaction with improvements made to acceptance, jam rate, security and cost of ownership.  1.3 million units have been installed globally, with a ship share of more than 70% for three consecutive years in the US and wins in the Asia-Pacific Region, including Singapore and Macau.
The addition of EASITRAX Soft Count to CASHFLOW SC creates a comprehensive software/hardware cash management system designed to improve operational efficiencies from the slot floor to the soft count room.  It works by gathering data from multiple note acceptors and funnelling that information into a single remote location, where it can be securely accessed to manage assets.  Because cashboxes no longer need to be tied to specific slot machines, EASITRAX typically saves 20-30 seconds per cash drop.
“By opening with EASITRAX, the Hippodrome Casino will leverage the industry’s best cash management solution from day one,” adds Boje.  “We expect this is the start of cash management systems, like EASITRAX, being installed in gaming operations across Europe – and with convenient retrofit kits, current MEI CASHFLOW SC customers will enjoy easy installations while getting the most from their previous investments.”

What women want?
Almost half UK and US adults play mobile games