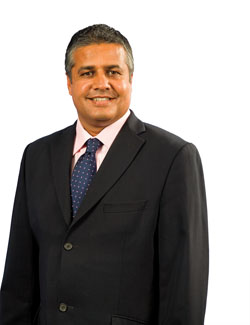 Sabby Gill was part of a raft of appointments from outside the gaming industry, resulting in new executives coming not just to IGT but to several gaming companies. The idea is a sound one – bring a fresh perspective, a new way of thinking and shake things up, increase efficiencies and give the business a boost. It does not always work, but in Sabby’s case, it certainly seems to have. He spoke with Casino International at the  G2E Asia event about what IGT’s recent merger will actually mean and more.

Casino International: Has your title and role changed since the merger with GTECH?

Sabby Gill: I am now Senior VP International Commercial Gaming. It’s similar to the role that I held at the former IGT but now it encompasses all former GTECH products.  I cover everything outside North America and Canada.

SG: Yes, it keeps me busy. The great thing is, the way the two companies have come together is very complementary, especially from an international perspective.  International used to contribute close to about 25% of IGT’s overall global revenue.  With the combined organisation there is a much more even global contribution of revenues.  Also, when our merger was completed in April, we reported that 45% of our global revenues (and we are now a $6bn company) in the new organization came from gaming, with another 38% from lottery, and the remaining 17% from sports betting, interactive, and everything else. This reflects our diverse portfolio and geographical spread.  Add to that 13,000 employees in 100 countries globally, with $6bn in revenue and $2.2bn in EBITDA (earnings before interest, tax, depreciation and amortisation) and that gives you an idea that it’s a very different company to what either one was previously.

CI: What will change operationally, for example with the headquarters of the company now being in London?

SG: The global headquarters is indeed now in London and we maintain operating headquarters in Rome, Providence, and Las Vegas. We’re a global company, appropriately represented by a global management team. The board is made up of members from both organisations, with Phil Satre, chairman of the legacy IGT board becoming chairman of the new company’s board. There’s a lot of continuity in relation to organisation with people at senior levels.  For example, Marco Sala, former CEO of GTECH is now CEO of IGT.

IGT is segmented into North America Operations and International Operations. Walter Bugno is the CEO and President of International, so he covers commercial gaming, where I work for him leading sales.  Walter also runs the World Lottery Associations, interactive, and certain key markets such as Greater China.  He is picking up all of the business development activity, so he has a team of individuals looking at new markets.

Really the philosophy for us from the international perspective is about three things: first is to really leverage where we are strong and to try and see where we can get stronger in those key markets, especially when you are a leader from either a placement or product perspective.  Second, we will work to leverage where we maybe have a small presence, looking to make that grow with the combined organisation.  Third, we will pursue how to enter brand new markets or territories that we have dipped our toe into, but we want to look at approaching more seriously and in a more strategic manner.

CI: What will happen to the regional offices, for example the sites in Germany that used to be Atronic before it was bought by Lottomatica?

SG: We have announced that we will achieve $280 million of synergies.  We are looking at all different aspects of facilities, including structure and back office.  Any specific decision around each office has not yet been formally communicated; there are moves to centralise some of the manufacturing operation and try to utilise as much of the facilities as we can, such as our building in Reno. We have the capacity there to produce close to 100,000 machines a year and we are not running at that rate now. As an organisation we will be centralising some of that manufacturing as a result. Whether any of that has an impact on Germany specifically, I could not comment.

CI: It’s interesting what the merger means for the game catalogue as well – GTECH/Atronic have some really interesting product. In fact their output in the last four years is among the very strongest in the market. That must make your life kind of easy…

SG: The products you are talking about, especially the TRUE 3D slots, feature technology and innovation that really brings out the best in some of the titles associated with our relationship with PopCap, such as Bejeweled, Zuma, and Plants vs Zombies. The immersive experience that the user gets with TRUE 3D technology and being able to turn it up or put it to whatever scale they want, really is superb.  It gives us the confidence now to be able to use and leverage that technology. We’re looking at many different opportunities where we can take the existing IGT game portfolio and really expand it with TRUE 3D technology.

CI: How does Asia fit into the company strategically? As a slot market, the player base in Macau for example is notably growing year on year.

SG: Our market share in Asia in general is in the low teens, but we expect this to change significantly because of the amount of market-specific work we have been doing.  This includes development of market-attuned content and targeting games more efficiently, combined with localised understanding and player demographics. A lot of what we have been talking about and working on has come to fruition, as our new games have been placed and performance has been above expectations. With the new regulations in place in Macau, we are confident that our market share is going to increase significantly; by how much, time will tell.

CI: What are the key growth areas globally for you?

SG: Still here in Asia, with Macau and The Philippines because of their new openings; some other markets, like Taiwan and Japan if they open their doors. Korea may happen; Cambodia, Laos, and Myanmar may yet happen.  Here at G2E Asia, these are markets that everybody is talking about in terms of new expansions and openings. In Latin America, we are looking at Mexico where there have been new legislation changes – we are waiting for those to be finalised and we will make some further inroads. From an international perspective I think those are our key markets. EMEA is a stable market, as there are no major new openings, although there are expansions and replacements. We are providing best-in-class service and maintenance for our products for our existing customers to make sure they get the benefit of the investments they have already made.

SG: I love it. The great thing about the new role is, as I mentioned, we were part of a North American organisation. It was great from an IGT perspective. We got a lot of benefit from having global products, but the focus was always predominantly North America because it was our largest market. Now we are part of an international organisation and part of a global company with such diversity across its portfolio, which means everybody is looked at on par. The biggest opportunities get the focus with appropriately allocated time and resources.

CI: You were recruited from outside the gaming industry – what qualities did you bring with you that you think may have helped you succeed?

SG: I’ve been here at IGT for almost five years now; it’s been a real ride. When I came here from the IT industry I had been there for 25 years. I’d been through every possible economic downturn, upturn, change in technology, in companies, rightsizing, upsizing, you name it. What that really gave me was experience. But in the last four-and-a-half years I’ve probably experienced as much as I had in the previous 25 with the way the markets changed.  We’ve gone through a merger, a downturn in certain markets, and opportunity in others.  That experience I earned has benefited the organisation because when I came on board a lot of what I had seen, we are experiencing now.

It’s not only the markets though, there is also a technology shift: in 25 years of IT we went from dumb terminals to networks, to local area networks, to wide area networks, to internet, to mobile and so on… I’ve seen all of that in the last four-and-a-half years and I still see organisations, some of whom are still using standalone product.  They don’t want to have it networked; they’re happy with just maintaining what they have.  On the other hand, we have global customers with our land-based and interactive products, and our game content, working across mobile and different platforms.  From that perspective, the main thing I have brought with me is experience.