The Rank Group celebrates raising a record £1.8M for Carers Trust thanks to support of staff and customers

Casino International > Industry News > The Rank Group celebrates raising a record £1.8M for Carers Trust thanks to support of staff and customers 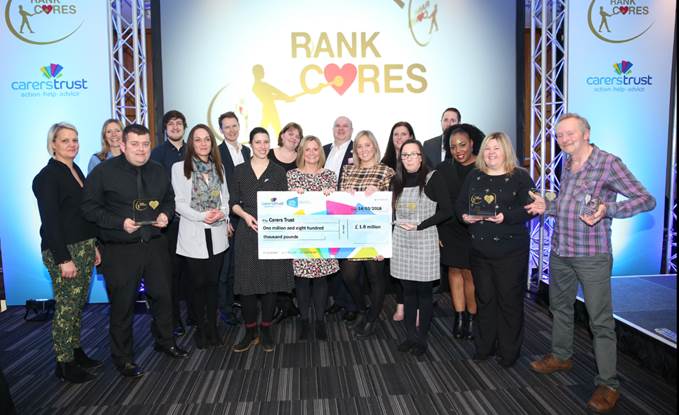 The valuable support of Rank Group staff and customers has been recognised at a special event in Coventry on 14th March, with regional winners across both Grosvenor Casinos and Mecca receiving awards for their contribution.

The evening was an homage to those who have gone above and beyond with their fundraising, making a true difference in the lives of carers across the country and a celebration of the incredible £1.8 million raised throughout this partnership. The event was attended by Rank employees from across the country, including CEO Henry Birch and Retail Director, Alan Morgan, along with Carers Trust representatives.

The partnership between Carers Trust and The Rank Group Plc, which owns Grosvenor Casinos and Mecca, first began four years ago. Since then, employees have worked tirelessly to raise money for this valuable cause through various charity initiatives, investing over 8,500 hours of their time to reach this impressive milestone.

The funds raised have gone towards Rank Cares Grant Funds which were set up to provide financial support to carers aged 16 and above.  The aim of these funds is to help remove the barriers placed on a person by their caring role and reduce some of the stress and isolation that can come with caring.

Since 2014, more than 8,500 carers have been helped thanks to the Rank Cares grant programme, with essential equipment, much-needed breaks, the opportunity to learn new skills, and the chance to meet other socially isolated carers.

Rank Group and Carers Trust also announced the continuation of their partnership into 2018, with renewed fundraising efforts aiming to hit the incredible target of £2 million.

Henry Birch, CEO of The Rank Group Plc, commented: “Carers Trust is an organisation that is close to the heart of many of our employees and it gives me a great sense of pride to know that collectively we have been able to make such a strong contribution to the charity.”

“Our teams have worked extremely hard throughout the course of the year to run charity fundraising activities to help us achieve this impressive milestone and without their dedication and the incredible support from the communities nationwide, such an achievement just wouldn’t have been possible.”

“We’re delighted to know that we have contributed in some way to the invaluable help the charity offers, and will continue our fundraising endeavours to ensure Carers Trust can carry on assisting the amazing unpaid carers who desperately need their support.”

Giles Meyer, Chief Executive of Carers Trust, said: “We are overwhelmed by the fundraising efforts of Grosvenor Casinos and Mecca Bingo. They have gone above and beyond once again and we’re delighted to continue our partnership into 2018. The reality is that three in five of us  will become carers at some point in our  lives, and with seven million carers in the UK already, staff’s fundraising plays a crucial part in providing the support carers desperately need.”