The time of Sands

Nearly 30,000 people showed up on Sands Macao’s first day. It was May 18, 2004, and they piled in through the entrance and poured onto the casino floor even before the opening ceremony took place. All were excited to see Macau’s first Las Vegas-style casino.
The US$265 million (MOP2.12 billion) casino was the first to open after the government threw open the gaming market to competition in 2002. It was the first casino in Asia built by gaming mogul Sheldon Adelson’s Las Vegas Sands Corp.
Macau and its gaming and tourist industries would never be the same again.
Ten years later, the city and the main drivers of the economy are not quite as different as liberalisation was intended to make them. Gaming revenue and the numbers of tourists may have ballooned, but Macau has yet to become a city of global appeal, and its economy is still heavily dependent on gaming.
As Sands Macao took its first bets, just a few streets away construction of another Las Vegas-style casino was building up steam. The US$700-million Wynn Macau casino-hotel, a project of gaming magnate Steve Wynn’s Wynn Resorts Ltd, was to open in 2006.
Macau had 11 casinos at the beginning of 2004. Today it has 35. Gaming revenue was MOP44 billion in 2004. It was MOP102.2 billion in the first quarter of this year. The city now has about 27,900 hotel rooms, three times the number it had in 2004. In March, 2.6 million tourists visited. In May 2004, about 1.3 million people crossed the border, not all of them tourists.
“Sands Macao marked the beginning of competition among the six gaming licence holders,” says Zeng Zhonglu, a professor at the Macau Polytechnic Institute’s Gaming Teaching and Research Centre.

Cluster effect
The growth of gaming has since accelerated, Mr Zeng says. “From 1999 to 2003 the growth rate of gaming revenue was 22 percent annually. From 2004 to 2013 the average annual growth rate was about 30 percent. A bigger cluster of casinos drew greater attention and thus sped up the growth in visitors.”
Sands Macao became a model for Las Vegas-style casinos and was subsequently copied throughout Asia. “Because of its having Las Vegas-style casinos and the clustering effect, Macau attracted more gamblers, and non-gambling visitors, too.
“It has become one of the best tourist destinations in Asia. The evidence of that is that many movie stars, big business leaders and other VIPs are visiting Macau.”
Another authority on gaming at the Macau Polytechnic Institute, Carlos Siu Lam, says the opening of Sands saw the first arrivals of a great number of mainlanders. “They queued up for the opportunity to go to the casino and gambled there night and day. It was the period when casinos established their first-mover advantage by tapping a pool of customers that did not know much about gaming,” Mr Lam says.
Unlike its predecessors, Sands Macao offered good restaurants and other amenities, he says.
“After a while, customers had a greater variety of choices, and the quality of products and services began to matter in enticing custom.”

Highly lucrative
University of Macau gaming specialist Ricardo Siu Chi Sen says Sands Macao ushered in a new epoch in the development of the casino industry.
Mr Ricardo Siu says the advent of the individual visa scheme magnified the drawing power of the new casino. The individual visa scheme gives citizens of dozens of places in the mainland visas to travel here as individuals rather than as members of tour groups.
“The success of Sands Macao reinforced the confidence of casino operators and investors in Macau, which set the stage for the impressive performance of Macau’s casino industry thereafter,” Mr Siu says.
The casino demonstrated the potential of mass-market gaming and strengthened the faith of investors in the concept of giant casino-resorts, so contributing to the development of the city as a place for casino tourism.
Revenue from mass-market baccarat was MOP28.49 billion in the first quarter of this year, 42.3 percent more than a year earlier and the most ever. Revenue from mass-market baccarat made up 28 percent of the first-quarter casino gaming revenue.
Macau Business asked Las Vegas Sands’ subsidiary here, Sands China Ltd, to comment on the 10th anniversary of the opening of Sands Macao, but the company declined to reply.
Macau has grown to be of paramount importance to Las Vegas Sands over the past decade. So lucrative was Las Vegas Sands’ investment in the city that by May 2005 the company had redeemed all of the bonds it had issued to finance construction of Sands Macao. It has since opened a casino in Singapore and plans to expand in other places in Asia.

Expectations met
Sands China’s earnings from Macau before interest, tax, depreciation and amortisation (EBITDA) rose to US$938.1 million in the first quarter of this year, 50 percent more than a year earlier. Las Vegas Sands said booming business in Macau had helped increase its first-quarter sales by 21 percent to US$4.01 billion. The company has now also expanded to Cotai, with three properties there that include gaming floors.
Today, the most profitable casino of the company here is The Venetian Macao, located on Cotai. In the first quarter of this year, Sands Macao’s adjusted property EBITDA decreased 5.4 percent compared to the same quarter last year, to US$91.4 million.
On the contrary, The Venetian Macao delivered record adjusted property EBITDA of US$470.1 million, an increase of 34.9 percent compared to the first quarter of 2013.
But billions of patacas in gaming revenue and millions of visitors have failed to push Macau much closer to the government’s goal of making the city a truly international tourist draw.
Mr Zeng says the proportion of foreign tourists shows that the government’s goal is still far off. “In 2013, Las Vegas had 20 percent of its visitors from foreign countries, while in Macau only 10 percent came from non-Greater China sources,” he says.
Mr Carlos Siu says the results of the liberalisation of the gaming market have met the expectations of the gaming industry, but not the expectations of the wider tourism industry. An excessive demand for gaming and insufficient manpower has held back development.
Mr Ricardo Siu’s feeling is that the results of liberalisation have met expectations. “The mass market is developing. From Sands Macao to the opening of The Venetian Macao, the MICE business also developed. Macau is today developing from a regional tourist destination into a more international destination,” he says.
We asked the Secretary for the Economy and Finance, and the Gaming Inspection and Coordination Bureau to comment on this report, but neither had replied by the time we went to print.
The government has been working to make the economy more diverse, but gaming is still the city’s dominant industry. Gross domestic product was MOP413.5 billion last year, 11.9 percent more than the year before. The government says growth was driven by an increase of 12 percent in the value of exports of services – in other words, gaming and tourism 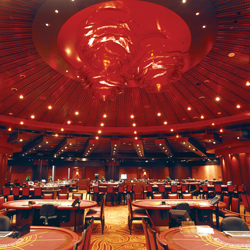