The toll of illegal gambling 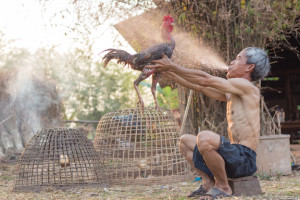 For centuries, many have believed that illegal gambling is victimless. Who cared when people gambled if they could financially absorb a loss? Whom were they hurting? However, society’s perspective changed when darker details of many illegal gambling operations emerged and sparked public outrage.

Assessing the scope of illegal gambling has proven challenging, especially since the last full-scale analysis was in 1999. That investigation focused on the years before modern technological advances altered the communications landscape.

In 2015, Professor and Criminologist Jay S. Albanese, Ph.D. of the Virginia Commonwealth University released his extensive investigation into current illegal gambling in the U.S. The American Gaming Association (AGA) has embraced Albanese‘s report, called “Illegal Gambling & Organized Crime, An Analysis of Federal Convictions in 2014,” as an important resource tool.

Albanese evaluated the details of 80 federal convictions in 23 states. U.S. law defines illegal gambling operations as involving at least five people who “conduct, finance, manage, supervise, direct or own all or part of an illegal gambling business,” violating state law.

With international terrorism, drug and/or human trafficking and violence a part of the public consciousness, the AGA aims to eliminate their funding sources with the public’s help. In a proactive move to strengthen its anti-crime programs, the AGA is partnering with multiple law enforcement, charitable and civic groups like the Federal Bureau of Investigation (FBI), the Humane Society of the United States (HSUS) and the National Sheriff’s Association (NSA). Together, they are targeting specific areas of illegal gambling.

At his annual end-of-year press conference last December, AGA President Geoff Freeman said, “…in 2015…we began working with state Attorneys General, the FBI and other interested parties through our Stop Illegal Gambling – Play it Safe initiative and our constant focus on illegal gambling. This is a tremendous opportunity to deepen our relationship with law enforcement, focus on a common enemy that which is engaging in illegal, unregulated, unprotected gaming for consumers.”

Officials of these organizations agree that public education and action may expedite their work. As the “eyes and ears” within any community, individual vigilance can make a significant difference. The AGA and FBI ask people to utilize the FBI’s Internet Crime Complaint Center (IC3) to report any suspicious cyber activity.

The IC3 is tasked with providing reliable, convenient reporting mechanisms to the public. These will help citizens supply information to the FBI regarding potential Internet-facilitated criminal conduct. Since 2000, their work has crossed into a wide spectrum of online crime events. Once reported information is analyzed, it is then circulated to law enforcement and the public.

In a recent statement, Freeman praised the alliance. He said, “In particular, the Internet Crime Complaint Center will be an invaluable tool for people in every state to report tips about the multi-billion dollar illegal gambling sector that preys on consumers, steals jobs and deprives state and local governments of revenues generated by the legal, regulated casino gaming industry.”

Later on, amusement operators typically owned these machines to complement their coin-operated equipment on location. They almost always posted a “For Amusement Only” disclaimer on the game. Bartenders typically managed this unregulated, untaxed poker, slot and blackjack equipment that has earned untold millions for decades.

However, illegal machines have long plagued dozens of states. Albanese reported that “illegal gambling parlors and in-person games” in 10 states, including Pennsylvania, represented 25 per cent of all 2014 federal gambling convictions.

Former Governor Ed Rendell sought state-controlled video poker in the early 2000s, but operator mobilization defeated him. This year, more than 25 years of lobbying may “pay off“ as the Commonwealth could legalize video poker.

According to Pennsylvania Amusement and Music Machine Association (PAMMA) Executive Director John Milliron, Esq., “The proposed legislation is attached to a major casino expansion bill, HB 649. We seek a full House vote by the end of March and a Senate vote by June.”

Resembling Illinois language, the bill’s multiple components require a $500 license fee each from licensed Video Gaming Terminal Operator and location. They will share net profits (33 per cent each); the Commonwealth of Pennsylvania will receive 34 per cent.

At a maximum five games per location, all machines must interact with a central computer. Any venue with three or more terminals must have redemption machines to prevent bars/clubs from handling any winning ticket cash. Under the threat of heavy fines imposed for violations, operators and locations will be free of extra conditions, reports and restrictions on how the clubs’ or taverns’ money is spent.

Illegal sports betting has ignited the AGA’s membership’s efforts to aggressively work for solutions. They will endorse practical legislation and regulation that also highlights the issue of lost tax revenues. Freeman confirms that rampant unregulated, illegal sports, online and offshore gambling has impacted the games’ integrity and effect on consumers.

For example, in 2015, gamblers legally bet $120 million in Nevada for the Super Bowl, but experts estimate $3.8 billion was bet illegally. Freeman stresses that regulatory legislation will protect players and collect taxes due.

Currently, only Nevada, Montana, Oregon and Delaware may operate legal sports betting, but New Jersey remains in the mix. After losing multiple court battles to introduce sports betting within its borders, New Jersey will soon get another chance at a higher court level. Preparations are already in place for a rapid launch should the state’s advocacy prevail.

For 2016, Freeman explained, “We now need to work with other interested parties like leagues, lotteries, law enforcement and many others to discuss what the right solution might be. We will be doing that behind the scenes, and those conversations have already begun…The only way we do that in a united way is to have a transparent and honest discussion with each of those interested parties.“

They rejected the charges that fantasy sports is gambling, instead calling it skill-based entertainment. Their defense is that Fantasy Football exchanges an entry fee and solid analysis for a chance to win daily cash prizes.

Nevada halted its operations last fall by introducing requirements that Fantasy Football operators secure the same licenses as any other gaming enterprise. New York State went further, halting all Fantasy Football activity and requesting $200 million be reimbursed to customers. A New York appeals court has now allowed FanDuel and DraftKings to operate at least until their May court hearing.

Additional states, including Illinois, have followed suit. To counteract growing uncertainty, some states like Wisconsin are drafting legislation to settle the law. For others, like Arizona, ambiguous legal language has created uncertainty.

In late 2015, the AGA, the HSUS and the NSA released a joint Public Service Announcement (PSA) video that urges the public to report any suspected illegal animal fighting and gambling.

HSUS President/CEO Wayne Pacelle says animal fighting paraphernalia, drugs and weapons are often present at a fighting site. He states, “Although under one per cent of the population participates, gambling on dog and cock fighting may attract 500-600 spectators. It reflects the societal ills of gladiator histories and ingrained mentalities.

“Some American geographic and cultural affiliations, plus an urban component more difficult to overcome, may incorporate dog and cock fighting. Internationally, the offending groups are diverse since Mexico, the Philippines and Thailand have legal animal fighting.”

The USHS hopes to transform the “legal landscape“ and American laws have slowly changed, state by state. Pacelle applauds the many efforts and generous contributions of the gaming industry, citing Steve Wynn as a key advocate.

The dog fighting epidemic made national headlines in 2007 after the arrest of NFL quarterback Michael Vick. He was accused of participating and bankrolling illegal dog fighting and gambling via his Bad Newz Kennels operation at his Virginia home.

Vick admitted to helping kill six to eight dogs and served 19 months in federal prison. After forfeiting a $130 million contract with the Atlanta Falcons and numerous commercial endorsements, Vick ultimately filed for bankruptcy in 2008. He later again created controversy with his 2009 return to the NFL in 2009. Vick has played almost every season since.

“It is illegal to bring a minor child into an unlawful fighting ring as a spectator. Michael is trying to stop this before it begins. We must eradicate this barbaric behavior worldwide in every dark corner. Michael has been a good resource. He acknowledges his past problems by striving to eliminate this heinous activity,” states Pacelle.

Thompson joined the AGA’s efforts against illegal animal fighting to further public awareness. He says, “Our evidence, unknown to the public, shows organized crime‘s involvement. We are using social media and will provide this PSA to sheriffs and school officers nationwide.

Thompson anticipates a positive NSA/AGA alliance, stating, “The AGA is a forward-leaning partner and we speak regularly. Like Geoff Freeman, we are proactively and aggressively fighting illegal activities.“

In a presidential/congressional election year, the AGA hopes to further erode illegal gambling. Continuing to work with outside organizations should go a long way to achieving that goal.