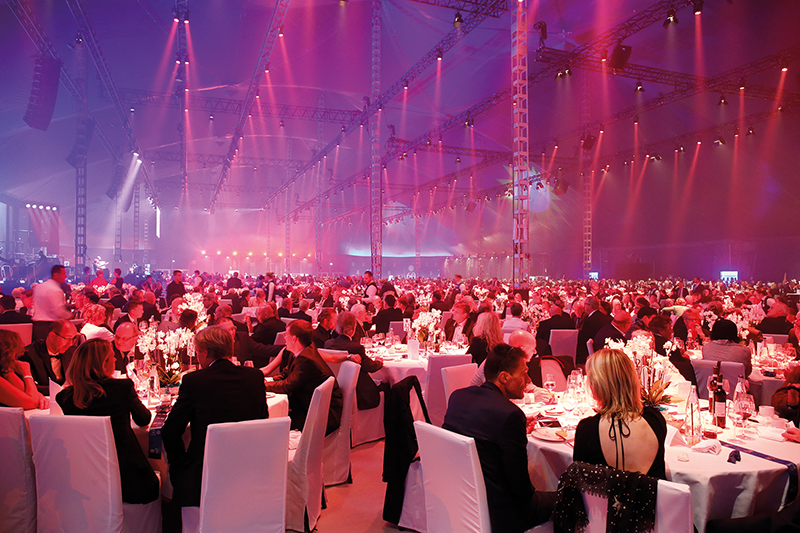 The family-run, East-Westphalian Gauselmann Group celebrated its 60th anniversary in a spectacular and unique weekend of celebrations in the region from Friday 8 to Sunday 10 September. More than 2,500 guests attended the anniversary festivities on Friday and Saturday evening; during the day, several thousand people visited the huge tented village (measuring 36,000 m2) in the north field behind adp Gauselmann’s production facility in Lübbecke. The special guest on Friday evening was internationally renowned violinist David Garrett and his orchestra. Pop group Pur set the mood for a first-class party on Saturday.

David Garrett captivated the audience with his interpretation of hits by Michael Jackson, Led Zeppelin, Prince and Coldplay. The audience showed their appreciation of the celebrity violinist and did not allow him to leave the stage without an encore. On Saturday evening, Gauselmann staff danced to the sounds of Pur and their hits, including Lena and Abenteuerland. Once again, the audience demanded encores, and lead singer Hartmut Engler and his band duly obliged.

On Friday evening, Paul Gauselmann was joined by long-standing associates in the 6,000 m marquee. Guests included representatives from the worlds of politics and business, the gaming machine industry, clients, family and close friends. Saturday was reserved for the company’s employees. Paul Gauselmann was greeted with standing ovations on both evenings. Jan Hofer was a charming and ever- professional host throughout the celebrations.

Paul Gauselmann played the German version of Harry Belafonte’s song Island in the Sun (Wo meine Sonne scheint, a hit for Caterina Valente) on stage from ‘Symphonie 80’ – the jukebox that marked the beginning of his entrepreneurial career. The company founder recalled his unique, 60-year history with the company, which began with a crossed bill of exchange for DM 100,000 and 17 jukeboxes. Today, the company is a global player and a market leader in the gaming machine industry with more than 12,000 employees and a volume of business worth approximately EUR 2.5 billion in 2016. “In 2017, for the first time, the company generated more sales abroad without losing sight of the domestic market. We are the market leader in Germany and will remain so”, said Paul Gauselmann. He thanked everyone who had accompanied him on the journey and who had remained at his side to this day – “above all, my large family of whom I am very proud”. On Friday evening, Michael Gauselmann, one of the entrepreneur’s sons, gathered together his brothers, their families and their children on the stage. He turned to his father, saying: “We are proud to be your family and we are very happy to be able to celebrate with you here today.” In a spontaneous speech, Hannah Gauselmann, one of Paul Gauselmann’s nine grandchildren, provided an insight into the private world of the entrepreneur. “You are a much-loved grandfather, who is always there for his grandchildren. Thank you for the wonderful childhood memories.”

Several speakers also praised Paul Gauselmann’s life’s work. These included Garrelt Duin, former Minister for Economic Affairs in North Rhine-Westphalia. “The fairness that Paul Gauselmann shows to his business partners is not always encountered elsewhere in the gaming machine industry”, he declared. He went on to argue against over- regulation of gambling. Hermann Otto Solms, FDP politician and friend, described the entrepreneur’s “irrepressible will to succeed” as the “secret formula for entrepreneurship of which Paul Gauselmann is an advocate”.

Other speakers included Elmar Brok, a member of the 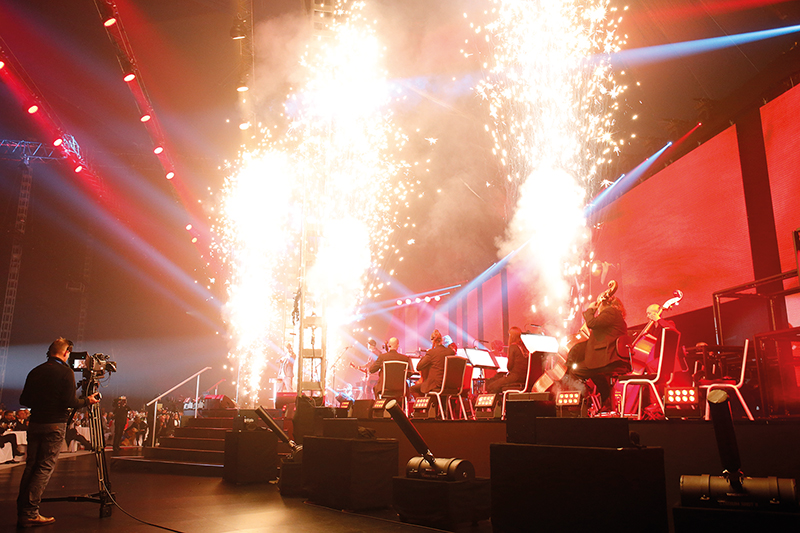 European Parliament, and Georg Stecker, Chairman of the Board of Die Deutsche Automatenwirtschaft e.V., an umbrella organisation for the gaming machine industry. Elmar Brok praised Paul Gauselmann’s courage and decisiveness, and highlighted his deep- rooted social commitment to the Minden- Lübbecke region. Georg Stecker referred to his dedication to the gaming machine industry, an industry that Paul Gauselmann has actively championed, including in his role as Chairman of the Verband der deutschen Automatenindustrie (VDAI) since 1981. “You always have your eye on the bigger picture and advocate for the entire industry – an excellent trait!” Steffen Kampeter, Managing Director of the Confederation of German Employers’ Associations (Bundesvereinigung der Deutschen Arbeitgeberverbände, BDA), described Paul Gauselmann as “one of the greatest entrepreneurial personalities that I know”. He also paid tribute to Karin Gauselmann: “She makes the Gauselmann Group a family company”, he emphasised. The guests thanked the entrepreneur’s wife with sustained applause and standing ovations.

A special premiere was also celebrated in the marquee: a biography of Paul Gauselmann – The Games Maker – Paul Gauselmann, written by journalist Barbara Dickmann – was launched on the night. Instead of presents, Paul Gauselmann requested donations to Vita e.V. Assistenzhunde, a charity of which Dunja Hayali is a patron. The journalist and TV presenter also appeared in a video message that was broadcast to guests. The charity provides assistance dogs to people with physical disabilities. Donations in excess of EUR100,000 were received on the Friday evening.

During the celebrations, the entrepreneur was also surprised by other messages from celebrities on a large video screen. These included the actor Mario Adorf, with whom Paul Gauselmann had made a film about his life’s work, and the footballer Lukas Podolski. Sending his congratulations, the footballer also announced that he would be a brand ambassador for XTiP, the Gauselmann Group’s sports betting company, from the beginning of 2018.

On Saturday evening, together with Chairman Armin Gauselmann, Paul Gauselmann presented awards to more than 120 long-standing employees, including those who were celebrating their 45th anniversary with the company. This was the first time that such an anniversary had been marked. “We hope that this trend continues”, said Armin Gauselmann. He then surprised Paul Gauselmann with a very special award: on behalf of the entire family, he presented him with a certificate to mark the longest anniversary with the company as he was the only person to have worked there for 60 years. Paul Gauselmann also received a gold coin engraved with his own likeness from the Merkur Senioren Club, whose membership comprises well over 100 former employees. Both evenings concluded with a 25-minute fireworks display and laser show at the adp production facility, which lit up the Lübbecke night sky. 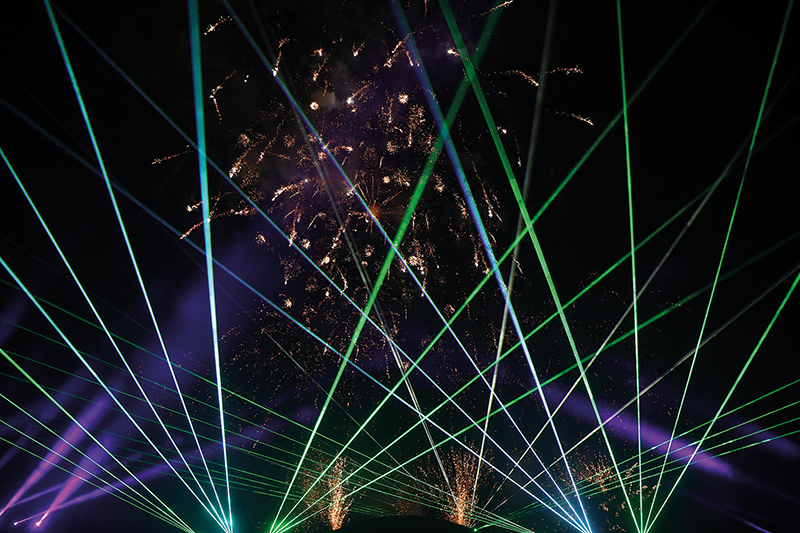 During the day on Friday and Saturday, many employees and invited guests enjoyed the celebrations in the large tented village, which measured a total of 36,000 m. On Sunday, it was open to the public. Several thousand people availed of the opportunity to visit. In addition to an exhibition tent housing 17 stands manned by the various subsidiaries of the Gauselmann Group, visitors also enjoyed attractions such as a Ferris wheel, bouncy castles, free tours of the factory and several catering tents. A variety of music acts and a diverse programme also featured on the outdoor stage.

The Casino of the Future… Now!
Making your voice heard in a crowded marketplace