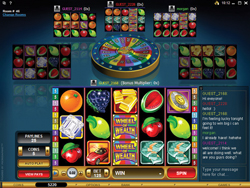 The multi-player offering
Microgaming’s multi-player product consists of two categories: tournaments and community games. Firstly, in relation to the tournament category, both slot and Blackjack tournaments are available. Arguably the most popular is slot tournaments, with 14 games utilised across five different tournament formats (Reloader, Extender, Survivor, One Shot and Accumulator) available on the Microgaming Network. The tournament names and formats were introduced in September 2010, an industry first, establishing the standards for this genre of gaming.
Alongside these tournament categories there are three major network Guaranteed Slot Tournaments for players to enjoy: Midweek Moolah, Weekend Whooper and Monthly Monster. Monthly Monster is the highlight event held at the end of each month, guaranteeing a substantial $30,000 Prize Pool, with the top 30 players taking home $1,000 each.
Not forgetting those players that prefer a game of Blackjack, regular online Blackjack tournaments are on offer in a knock-out style tournament, with the main network event held every Thursday: $500 Blackjack Attack. As a game of skill, the competition element is particularly prominent in this game type.
The second category for multi-player, community games, comprises six titles encompassing slots, table and arcade-style types. Multi-player community slots include No Worries, Wheel of Wealth Special Edition, ISIS and recent addition, Avalon. Each game injects a community aspect, allowing players to enter a virtual room, share the action and play alongside fellow enthusiasts. Players can also view other players’ game play; watching how others perform creates a more competitive atmosphere. The highlight of each game is the shared bonus feature. No Worries and Wheel of Wealth have a bonus wheel; ISIS and Avalon both contain a free spin feature, all of which are triggered randomly whereby all players inside the virtual room share the winning bonus.
The community games portfolio includes multi-player Roulette – a classic European Roulette game, which allows multiple players to login to a single game session – effectively taking the land-based casino experience and recreating it online. The multi-player style of gaming creates an interactive community, where players can view each other’s game play. Watching how others perform on their game creates a more competitive atmosphere, unique to multi-player.
Finally, adding a new dimension to multi-player slots is Max Damage and The Alien Attack, a revolutionary new arcade style game that has taken slots to a whole new level. With nine levels and three boss ships on the familiar vertical screen layout, the game fuses nostalgia with today’s most advanced gaming technologies. Players are given six lives to work their way through the game, with bets placed and points awarded according to the number of aliens destroyed. Enemy spacecraft can fly at the player’s ship, both individually or in formation, heightening the danger and upping the player’s chance of losing a life. Max Damage brings the leader board component to the forefront, displaying player’s top scores, firing up the level of inter-player competition, a popular component of multi-player gaming.
It’s fair to say, Microgaming provides the widest variety of multi-player gaming options in the industry. Intent on staying in this leading position, the portfolio continues to expand with monthly scheduled updates to ensure content is regular and fresh.

The development
The multi-player offering is built on Microgaming’s world class casino gaming engine, which enables the multi-player software to utilise Microgaming’s best-of-breed games. Slot hits such as Immortal Romance and Hitman have been configured for use in a multi-player format, and while they function as a classic slot game with large wins and bonuses available, they include a number of new, in-built interactive features such as chat. Essentially it’s a case of updating the classic favourites with new and innovative technology; it sounds relatively simply, but is in fact a little more complicated.
When configuring Microgaming’s premium single-player content for use in a multi-player format, efficiency is imperative. Solid understanding of the game design ensures that the development team can cater for the challenges that are inherent in adding a multi-player component into the mix. A component, which on face value may seem relatively simple to add, can actually bring about complications that need to be managed carefully and efficiently. The dimension of real world timing is perhaps the biggest challenge in the development of multi-player, not only in respect to play time but in ensuring that players distributed across the network are treated equally irrespective of their local specifications. It’s a challenging task, but one that is achievable with commitment and hard work.

The operator
More and more operators are looking to incorporate multi-player into their product mix and embrace the platform.  Multi-player is an excellent tool to drive player acquisition and retention, particularly when combined with Microgaming’s business solutions offering, which includes key rewards and incentive management modules to best serve operators in the marketplace.
A characteristic synonymous with Microgaming software is flexibility; multi-player tournaments can be run across either the network of Microgaming Casino operators, or by individual operators for their players alone. To promote these tournaments the operator is provided with an extensive catalogue of promotional assets. Operators can advertise tournament schedules via a series of effective channels: website, email, in-client messages and web banners. For the high-rolling tournaments that offer a large winning prize, this forms the perfect marketing campaign to acquire a new slot player.

The player
So what makes multi-player gaming so popular? The prevailing trend in the online world of social interaction undoubtedly plays an important role. Multi-player combines popular gameplay with a social and community aspect, allowing a communal user-experience. In addition, multi-player tournaments add a competitive element to the game, something that isn’t offered in traditional slot play.
Of course, integral to the popularity of slot tournaments is the prize. The bigger the prize pool, the more excitement and anticipation surrounding the game, and the more attractive it is for players to enter the tournament.

The future
The importance of social interaction within online gaming will increase with time. Globally we are becoming more connected, more internet savvy and more socially networked and so multi-player with its injected social features, is set to become increasingly popular.
Ahead of the curve and in recognition of this growing popularity of community-based gaming, Microgaming is releasing a succession of new games and software upgrades to its multi-player platform including the delivery of multi-player content through a single casino integration. Keep an eye-out for new additions – operators and their players have plenty to look forward to in the coming months.