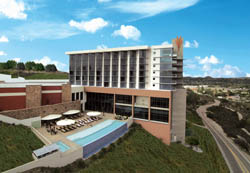 Most casinos try to be as unobtrusive as possible when updating the venue, with minimal guest grievance but it’s absolutely unavoidable. Trade suffers, guest satisfaction suffers, the guest experience is tarnished and the operator has to work hard to restore the relationship.

Casino International: What size is your property?
Joe Navarro: We’re about a 350,000 square foot property in total, including 108 rooms in an eight-storey hotel, and around 75,000 square feet of gaming space. The remainder is back of house, restaurants, kitchen… We have 2,000 Class III slots, and 21 tables.

CI: And what’s your background, Joe?
JN: I’m a native San Diegan, and a tribal member of the San Pasqual Band of Indians. I’ve been in San Diego my whole life and in the gaming industry for 13 years, exclusively with this property. Outside of gaming, I served 25 years as a law enforcement professional with the San Diego Police Department, which I retired from in 2005, as a sergeant in the Street Gangs Unit. I was elected by the tribe in 2003 to serve as its representative on a management committee, and it went from there.
CI: Where did the idea come from for this radical makeover?
JN: We meet our stakeholders every quarter and I have the chance to stand in front of 200 people and talk about how, and why we are doing what we’re doing. Over 13 years we have developed a significant amount of trust in that relationship, and it allows us to think outside the box and to try things that might not traditionally be the way things are done. 12 months ago I was sitting at my desk, looking at our proposals and I thought, there has to be another way – let’s think on this some more. And this was the only viable, beneficial and financially prudent way for us to proceed with the scope of the project we had at hand.

CI: So, this was a head-to-toe remodel – is the 11-day period in January where you carried it out a quiet one traditionally?
JN: We didn’t leave any detail to chance. We picked that time because historically – and bear in mind we have only been operating since 2001 – those mid-January dates after New Year’s, are generally pretty slow.

CI: It sounds a bit nuts.
JN: You’re right! It was a delicate balance. Our property is unique and purposefully so, in that we have one entrance. That stems from my background in law enforcement; having been to Vegas and various casinos, seeing there are half a dozen ways to get in and out of a building, doesn’t make security sense to me. So when we built Valley View Casino & Hotel, we built it with one grand entrance. So for us to do something like this remodel, we would have had to open up a wall or something similar because as we moved from one side of the building to the other, we would have had to close that front entrance at some point. We also had limited restroom space. Our demographic is unique as well, it is primarily female, 45-75, and bathrooms are a huge commodity for us. Closing them off for long stretches, closing slots, the entrance… it didn’t make sense to do that, particularly when we would have to work ‘graveyard’ hours, which would cost us more with a contractor and extend the project by six to eight months. In this competitive market, that kind of impact for that kind of time will drive our guests to our competitors.
Eleven days wasn’t the plan initially – we wanted to do it in eight! We have used the contractor on four separate occasions, on expansions and the initial build of the hotel, so we were confident and comfortable that they had the resources to get this done. When they told us, we can’t do this in eight, nine days – but we can do it in 11 days, we listened.
There are other considerations as well – in California, if a business that has an Alcohol Beverage Control license closes consecutively for 15 days you have to surrender the license. So that gave us an absolute cut-off, or we would have to surrender our ABC license which would be catastrophic.
So on January 6th, a Monday, we allowed guests to stay until the start of the gaming day, which here is approximately 3am. We had notified guests, done media press releases, television, radio, we mailed 250,000 mailers to loyal guests… So come 2am, we didn’t have a lot of guests in. We had a team present to interact with the guests and close the property. And at 4am we started to dismantle the property, with everything starting at the same time; we had trades in from virtually every component of construction.
We moved almost 2500 chairs from the property, from table games and slots; we helped a vendor load those up because they had been sold. We moved all the slots, and while this was happening the contractor was demolishing bathrooms and everything that needed to be done. The bathrooms were stripped right back to the studs, even the drywall was removed.
Every component of the remodel was underway at the exact same time. Our schedule was worked out hour-to-hour, which is unusual as they are usually week-to-week or even month-to-month.
We closed the casino down and finished the job in ten and a half days, after working 24/7. We finished several hours ahead of schedule, which gave us time to tie up a few loose ends!

CI: Did you change anything significant – new slots, furniture etc?
JN: We primarily upgraded. In our jurisdiction, 2000 slots is the maximum allowed by the state. We have good, locked-in vendor relationships, so all we did was upgrade what we had.
But something significant for us is our buffet. People travel 200 miles for our buffet, it is our primary driver. People wait in line up to three hours to get to our buffet; we are the only lobster provider every night at the Buffet and all day Saturday and Sunday in the country, I believe. And behind the chain Red Lobster, we are the second biggest buyer in the country of Maine lobster tails. It is VERY popular and has a reputation throughout southern California. For us, people will wait in line which is no bad thing for an operator. But we wanted to be able to gain some capacity, to turn those tables five or six times each, and we added 50 seats which is a significant improvement. We moved walls, took some out, added walls… That was really the only physical change in the building.

CI: Did the remodel take in the hotel as well?
JN: Yes it did. Our hotel rooms are very nice; our standard room is about 525 square feet, which is quite large in the industry. We repainted, cleaned the carpets, the tile and marble in entries and restrooms, replaced the carpet in the hallways, changed the carpet to hardwood in the elevator lobby. We really gave the property a fresh new look.

CI: How did you market the re-opening after 11 days? It’s such a great marketing opportunity…
JN: We started that process eight months in advance. We considered how we were going to do it and came up with both an offer and newsletter opportunities that we implemented in late December. The first thing we did was to send all of our carded guests, in their newsletter, an explanation and offer of redemption of Moreplay based on rate of play – Moreplay being our trademarked term for free slot play. We sent this mid-December I think. They got it, they knew what was happening. We were in print media, on the radio… We have a good strong marketing presence anyway, and we took advantage of that.
For those guests we couldn’t reach we had staff 24 hours a day in our entrance. Those that drove up, everyone in the vehicle got a mystery envelope, which was redeemable any time through the month of January after we reopened, for varying amounts up to $1000 in Moreplay.
We tried to get folks as excited as we could in advance of the closure; we tried to notify and build excitement during the closure; then just before we opened we did a strong media blitz, on several local news channels. The day before we opened we did television, radio and print to say the grand opening was happening.
We opened at 7:55am, Friday January 17th and there were about 300 people waiting out front. Even though it wasn’t even a 24-hour day, we had the highest number of people in our building in our history, with over 14,000 people coming through during the day. It was the busiest weekend in our history too.
The other component of this time frame is that our neighbour down the road, Harrah’s, is adding a new 600-room hotel tower so they are under extensive construction and haven’t closed. We wanted to get our property open ahead of our competitor opening their project. The timing was good and the results speak for themselves.

CI: How did the downtime work for your staff?
JN: As a team member you had the option of using paid time off, working at a fixed rate to do labour to help facilitate the project. If you couldn’t afford the time off we advanced you 40 hours to be recouped over the year. Hourly team members were offered a $500 no-interest loan. We did not have one negative comment or negative impact from the thousand people we have here. Many took vacations, a lot of people came in and worked. It was arguably the most amazing component in this, the team really pulled together and that’s what shines out of this project for me.

NB: Be sure to check out this article in the digital issue of Casino International so you can see the time-lapse video of the makeover!

Roll up… roll up!
Screen Technology