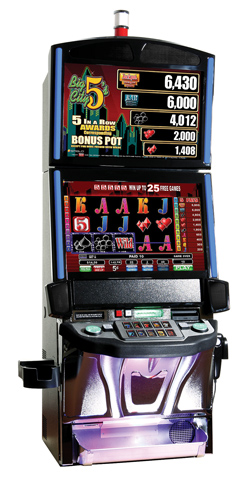 SPIELO International explains it all
The first approved vendor to the Italian VLT market, SPIELO has been in the market from the beginning and installed the first countrywide jackpot on their VLT system, as well as growing in North America and with an eye on Greece. The Lottomatica VLT network’s WAP jackpot comprises one of the world’s largest networks of VLTs connected together on a jackpot. Victor Duarte, Senior Vice-President and Chief Operating Officer, SPIELO International spoke to us about what is needed to achieve a successful gaming environment for VLTs.

Q: What regulatory framework needs to be in place in a jurisdiction for VLT product to be suitable to that market? What technology needs to be in place for an operator or jurisdiction to be able to benefit from VLT machines?
A: An in-depth, detailed set of regulations must be set up, taking into account both security in distributed environments, as well as the required technological complexity that is behind the unique player experience a VLT systems offers. The framework can be divided into two categories: regulatory needs and commercial considerations.
Before VLTs can be put in place, the following regulatory requirements should be addressed:

• All aspects of the VLT program should be certified, with controls on all of the system’s different components. These mandatory checks should be performed either by the jurisdiction or a trusted 3rd party in order to earn certification;
• Full central control of each individual machine, with the possibility of remote shut down when necessary;
• Reliable online connection on a dedicated and protected network;
• Clearly defined venue requirements (e.g. credit checks, retailer has clean criminal background, etc.);
• Well-defined, appropriate Responsible Gaming features to facilitate informed choice by players, such as: on-screen educational material about gaming, allowing players to set time and budget limits, and automatic cashout once the limit is reached.
• Clearly defined product requirements, such as support for standard protocols. For example, using open protocols, such as the Gaming Standards Association’s (GSA) game to system (G2S) protocol for communication between the gaming machine and the system, encourages the introduction of new technology. SPIELO International’s central system, INTELLIGEN, was the first ever to receive G2S product certification, meaning that the G2S protocol has been implemented exactly the way GSA intended.

From a commercial point of view, operators should consider:

• Establishing clearly defined taxation methods, as each component of the value chain needs to fully understand what is required of them and how they are to be compensated;
• Warranty repairs by certified technicians or third parties, with penalties for non-compliant fixes;
• Smooth procedures for updating software features (including new games), to be verified by the appropriate regulatory body after installation;
• Fair and transparent pay-outs, to appeal to players who are used to casino-type experiences;
• Attractive jackpots, leveraging wide-area progressive technology;
• The ability to leverage titles from other gaming channels (e.g. casino, iGaming) to appeal to regular gamers where appropriate. That said, as a matter of policy, SPIELO International develops content specifically for the VLT marketplace, developing and testing games on a regular basis with VLT players around the world. Our library includes a variety of proven performers appealing to VLT player segments (see question 5 for examples).

All of the above considerations must be thoroughly tested and sound from a technological standpoint. Solid technology is definitely a key success factor when establishing a VLT program, and the jurisdiction must choose distribution partners that can show a proven track record of developing and managing systems of this complexity. With more than 20 years of experience deploying systems globally, SPIELO International is the most experienced supplier of end-to-end VLT solutions in the world with an offering comprised of top performing games and proven software and hardware.
Q: What are the key benefits to operator, regulator and government with a VLT setup?
A: If a VLT program is well distributed, professionally run, and attractive in terms of prizes and player experience, players will consistently choose this option. This is a double win, as not only will legal operators see an increase in revenues, but the grey markets will be diminished.
The regulator has the benefit of full control. They can evaluate market conditions and react quickly, with the help of the technological partner to implement required changes efficiently and seamlessly via the central system.
The government, as well as the regulator, will see a strong rise in revenue reclaimed from illegal activities, which allows them to use these proceeds for the benefit of their population. The players benefit, not only from the excitement of the new games, but also from knowing they are enjoying a fair-play experience with player-driven Responsible Gaming options.