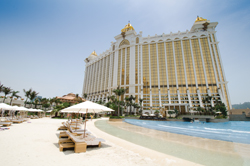 Cotai is getting more crowded by the day. As new casino resorts open, their marketers are stepping up their game to ensure nobody is a loser.
The era of “build it and they will come” has passed, industry insiders say, and non-gaming attractions are now used to distinguish Cotai’s casino resorts.
Galaxy Macau’s vice-president of marketing communications Jane Tsai says casino resorts have been benefiting from a tendency in Asia for anything new to win a lot of attention in the months after it is launched. “But if you haven’t done the marketing and the positioning right, you are not going to get the long-term return,” Mrs Tsai says.
It benefits nobody for the operators of casino resorts to engage in marketing quarrels, she says. “We, as well as Macau, all benefit if we work together. We all have distinct-enough products.”
With gaming advertising forbidden in the mainland, Macau’s main source of visitors, Mrs Tsai says it is even more important for casino resorts to work on their brand positioning. It comes down to the basics: how well casino marketers know their customers.
“You cannot market something effectively if you don’t even have a good product niche. You definitely have to know the customer segment, you have to know the market and you have to have a good product.”
Mrs Tsai says Galaxy Macau’s positioning strategy revolves around the theme of being the “new palace of Asia”, offering an authentic “Asian resort” experience.
“The insight on the Asian resort is understanding that most consumers in the Asian region head to Southeast Asia to go on holiday. Why not then take that understanding of a choice to travel and give them a reason to come to Macau? It is using that customer insight to create a product,” she says.
She says the Galaxy marketing team works in such a way that when visitors arrive in Macau, they are already aware of the brand through active marketing in source markets.

Word of mouth
To achieve success, casino resorts need to invest in an integrated marketing plan that includes everything from regular advertising to inviting reporters to visit and write about the property.
“There is some amount of last-minute decision-making that does happen at the border itself,” Mrs Tsai says. “You can actually influence a percentage of the traffic coming across the border with prominence of signage and top-of-mind awareness.”
Also important, is that patrons leave Galaxy satisfied with the service. “Word of mouth is the most powerful form of marketing,” Mrs Tsai says.
Brendon Elliott, the vice-president of sales and resort marketing of Venetian Macau Ltd, a subsidiary of Sands China Ltd, has among his tasks the promotion of Cotai’s newest casino resort, Sands Cotai Central. The first phase opened in April and includes a Conrad hotel and a Holiday Inn.
“What we are starting to do is have greater alignment with those global brands,” Mr Elliott says. “We are working on maximising Conrad and Holiday Inn’s brands and DNA, their loyalty [programmes] and their market positioning for the positioning of Sands Cotai Central.”
He says the hotels bring a new level of customer that the Venetian Macao and even the Four Seasons Hotel Macao could not previously reach. Mr Elliott expects the opening of the Sheraton in September to do more of the same, but also do it in the meetings and conventions market. The Sheraton chain’s parent company, Starwood Hotels and Resorts Worldwide Inc, has a special loyalty programme for planners of meetings and conventions.

Venetian benchmark
Although Wells Fargo analyst Cameron McKnight said last month that the data so far show no signs of Cotai Central being a big driver of growth in the number of visitors to Macau, Mr Elliott says the casino resort is performing as expected.
“The second quarter is the most quiet period in the year. We are on track. We are doing quite well in regards to the product positioning over there,” Mr Elliott says.
Apart from Sands Cotai Central, Sands China also has the Plaza Macao and the Venetian in Cotai. Mr Elliott says the Venetian is the easiest part of the Sands China portfolio to market.
“It is an iconic property. When we look at the other integrated resorts built around, it has all been benchmarked against the Venetian,” he says.
But, he adds that the resort “still needs to have its brand appeal, its awareness. You can’t just sit back.”
The results of research published recently by Union Gaming indicate that the Venetian leads Cotai’s walk-in mass market, with a share of 50 percent. It is also the overall leader in the mass market in Macau, with a share of 20.4 percent, while Galaxy Macau comes in third, with 12.1 percent, the research shows. The Lisboa complex, on the peninsula, is the second most sought-after property, with a mass market share of 14.7 percent.
A great deal of Mr Elliott’s effort goes into developing new markets. “To fill the world’s largest Conrad, the world’s largest Holiday Inn and currently Asia’s largest hotel, it requires a diversification of segmentation. We cannot rely just on one segment,” he says.
Mr Elliott was at IMEX Frankfurt in Germany, one of the world’s main trade shows for incentive travel, meetings and events, recently. “It went phenomenally well,” he says. “We walked away with more enquiries that we have ever in the past.”

Entertainment envelope
Sands China took part in the event under the Sands Cotai Macao brand, a trade brand that brings the strengths of all its Cotai operations under one umbrella. “That allows us to compete on a global scale with some strength and credibility,” Mr Elliot says.
Sands China has also been developing special packages, bundling together entertainment with hotel stays. “We do a phenomenal amount of our business-to-business through packages.”
Sands China in general, and the Venetian in particular, have played an important role in the city’s effort into tap the Indian market. The process began in 2009, when the Venetian played host to the annual India International Film Awards ceremony, broadcast to an estimated audience of 500 million. Since then the property has hosted other Indian shows, the latest being January’s Zee Cine Awards.
“The great thing about the Indian market is that people are very aspirational, they love celebrities,” Mr Elliott says. “By hosting these awards, it gets us significant traction.”
Indian tourists prefer to travel on weekdays, helping to fill a void in hotel occupancy. Greater China visitors usually come for the weekend. “We have got another one or two markets we are currently looking at and are working on developing similar strategies to what we do with India,” Mr Elliott says.
Without disclosing figures, he says Sands China’s marketing budget this year will be the same as last year’s. So far the return on investment has been “phenomenal”.
Melco Crown Entertainment Ltd says its entertainment offerings distinguish its City of Dreams casino resort, creating an envelope which is filled by gaming. Entertainment offerings include the “Dragon’s Treasure” multimedia show, the Club Cubic nightclub and the HK$2-billion (US$258 million) “The House of Dancing Water” show.
“We believe our premium mass-market focus at City of Dreams represents one of our key competitive advantages, giving us an ability to capture and leverage a loyal and more profitable customer base,” the company told Macau Business.
“We have continued to execute this premium strategy, both in the rolling chip and mass-market gaming segments, as well as in our world-class entertainment and other non-gaming amenities.”