Woman Wins Community Award at the British Casino Awards After Raising Over £70,000 for Charity 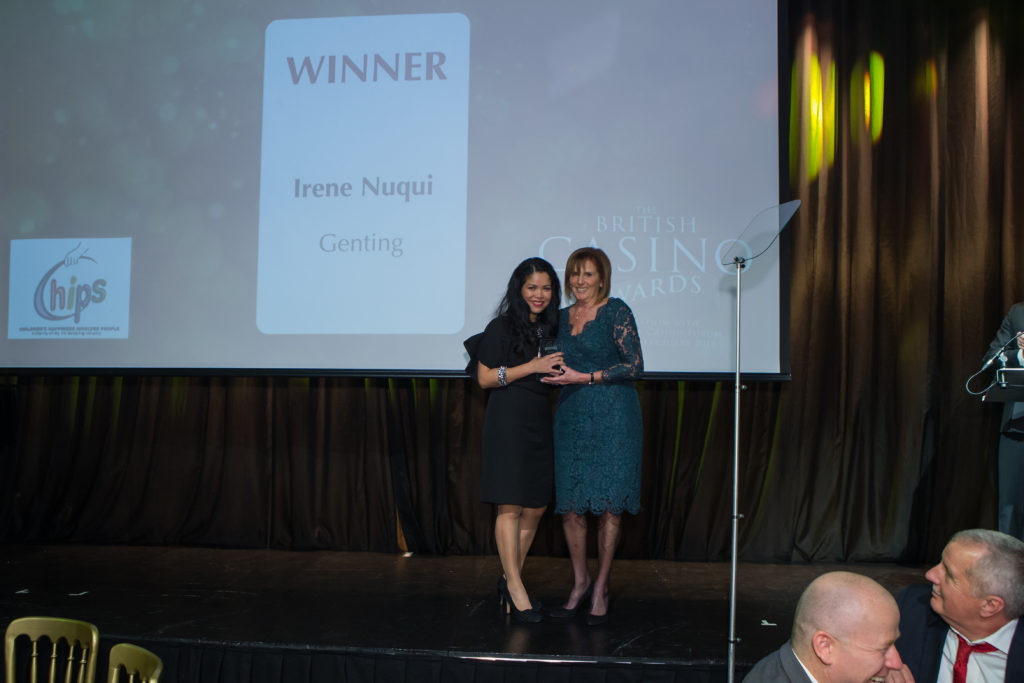 Irene Nuqui, aged 44 from Chafford Hundred in Essex, has walked away as the winner of the CHIPS Community Engagement Award at the British Casino Awards, the industry’s night to recognise excellence in the gaming sector.

The award is presented to a UK-based casino employee who has done something exceptional in fundraising or has worked extensively within their community for the greater good.

Irene, who was up against three other people, was selected as the winner after initiating the first of a series of sponsored runs back in 2015.  Irene then galvanised a team of Genting UK employees to raise £71,000 for the CHIPS Charity by taking part in two Marathons and three Half Marathons in London, Las Vegas and Madrid.

Irene, head cashier at Genting’s Palm Beach Casino said, “It is a huge honour to have been presented with the CHIPS Community Engagement Award.  No success is possible without the backing of a dedicated and solid team, and I would like to take this opportunity to say a huge thank you to everyone involved in the fundraising efforts over the last three years.

“That includes the marathon runners, the staff at Genting UK, all those who continue to sponsor us every year and the team at CHIPS Charity.”

CHIPS Charity, the official charity of the British Casino Awards and founded on behalf of the Casino and Gaming Industry, raises money to purchase specialised wheelchairs for young people with disabilities.  The £71,000 raised has been used to buy powered wheelchairs for 11 children with lifelong conditions that impair their movement and coordination and are dependent on wheelchairs to get around.

Linda Lindsay, co-founder of CHIPS Charity said, “I am absolutely thrilled to present Irene with the CHIPS Charity Community Award.  It has been fantastic working with Irene and the rest of the team at Genting UK over the last three years and I would like to take this opportunity to say a huge thank you on behalf of everyone at CHIPS for their hard work and determination.

“The new wheelchairs mean that the children are now able to move around without relying on others, providing them with the independence that they so richly deserve.”

Irene and the rest of the team at Genting UK are now preparing for their next fundraising event – the San Diego Rock ‘n’ Roll Marathon and Half Marathon taking place in June.

Irene continued, “We are all really excited about the prospect of travelling to San Diego and are well underway with our training and fundraising efforts. This year we have set ourselves a new target of £50,000 and we are all confident that we will have absolutely no problem reaching this!”

Another Major Installation of EGT in Codere’s Casinos in Columbia
Now THAT’S a Full House!