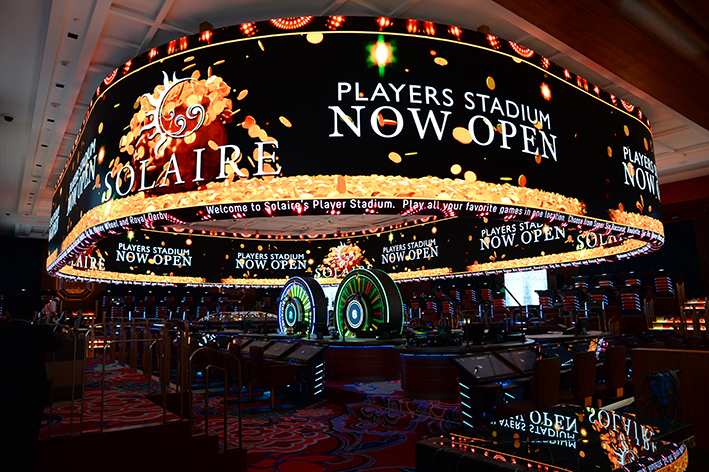 11th of February marked the opening of Players Stadium, in the three time Forbes Travel Guide Five Star awardee. This Stadium is easy to define as something special, something that was never seen or done before.

Solaire Resort and Casino had the vision of taking electronic gaming to the future and Alfastreet shared that. This collaboration resulted in something truly unique and produced a feat that no property has ever attempted. The dedicated space for the Players Stadium is a reflection of Solaire’s impeccable taste and unconditioned luxury when it comes to design and comfort. The Stadium is arranged as a 4-level gaming station with all the live and electronic table games concentrated in the center. The entire gaming setting is beautifully topped with a one-of-a kind LED double-sided signage that impressively runs around the Stadium area. The fully bespoke curved display is equivalent to 360 square meters of screen with over 91 million pixels along with the custom P2 underside being the only one of its kind in the world and weighs almost 12 tons. It also has a luxurious bar that provides all the amenities and caters to the players, as well as an additional 12 Alfastreet BarTop stations that are also connected to all the games on the floor. 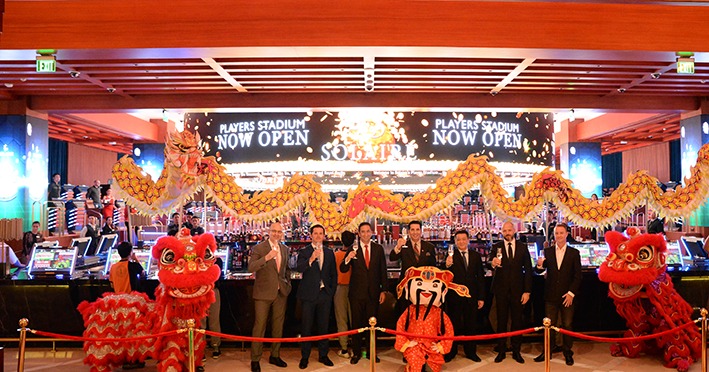 The project took a year to complete. The complexity and the technology that the project demanded meant countless hours of innovation, development and imagination. While we are proud of our final product, the whole Alfastreet team is also very much impressed with the professionalism and highly skillful approach of Solaire. Working together, we were able to achieve better outcome, and we are dedicated to support and improve the Solaire Resort and Casino’s Players Stadium.

Solaire Resort and Casino has exploded into the Asian Integrated Resort scene and is one of the finest properties across the globe. Solaire is one of the best in Asia and ranks at the top of the list in the Philippines since its opening, 6 years ago. The vision of their leadership led to the creation of the Players Stadium and we’re proud and thankful that Alfastreet was chosen to take on this extraordinary project.

Alfastreet has been a leading producer of electronic table games with a 25-year history and perfect reputation on the global making market. With products currently installed in 111 countries of the world, it is indisputably the most successful ETG brand.

The specialty of the company is Stadium style setup, where we install the most innovative and luxurious formats all around the world. In Asia, Alfastreet holds numerous Stadium installations in Singapore, Philippines, Malaysia, Cambodia and Laos. And none of these can compare to the Players Stadium presented in Solaire.

Truly, the Players Stadium is something to be seen, talked about and admired.

We would like to sincerely express our gratitude to all the professionals from Alfastreet and Solaire, as without them, such achievement would not be possible.