Supports integration of contactless technologies including payment alongside the touch display. Touch latency reduced by a third for improved player experience. 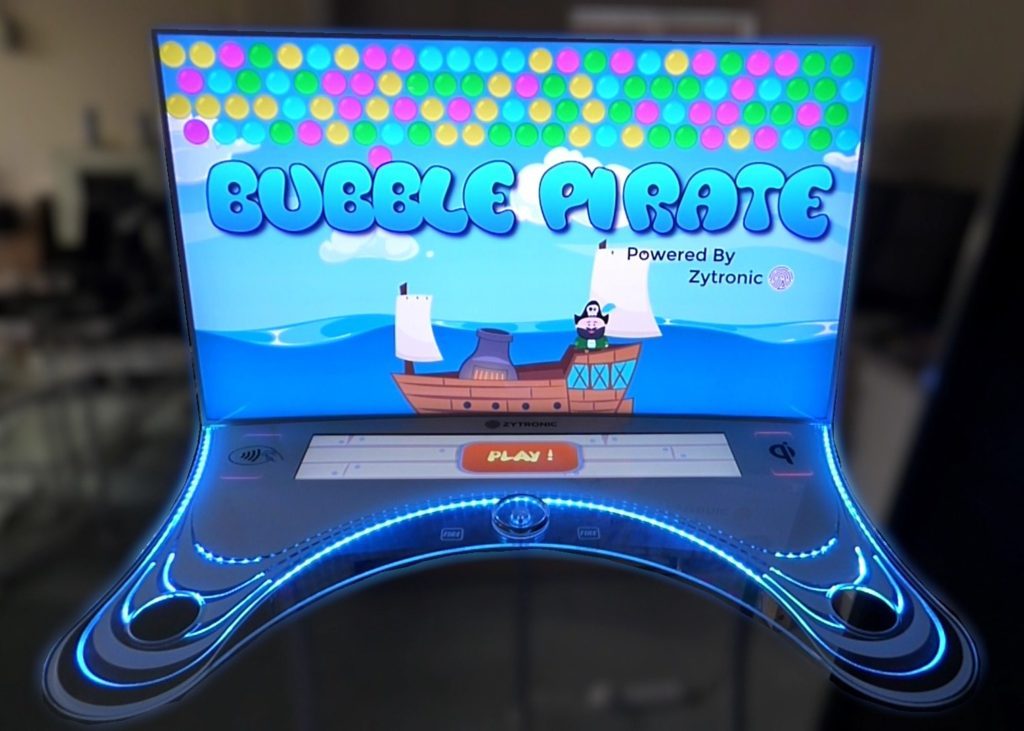 The major advantage of the new ZXY500 controller is its compatibility with contactless technologies increasingly being integrated alongside displays to enable payments, customer tracking and battery charging within the console. RFID, NFC and Qi phone charging all generate signals that can interfere with the operation of conventional touch screens, but the new controller has industry leading signal-to-noise ratios and sophisticated algorithms that change dynamically to reject electromagnetic interference in the operating environment. Zytronic has tested each of these technologies with the ZXY500 controller and demonstrated that they can be implemented very close to active touch area without impairing the performance of the touch screen. A further benefit is the new controller’s support of 3D touch, which allows simple implementation of audible touch for partially sighted or blind users. A light touch can trigger an audible confirmation of the option selected, which can be confirmed by pressing harder.

The new controller is specifically designed for use with Zytronic’s industry leading Projected Capacitive Technology (PCT™ and MPCT™) touch sensors. Zytronic is well known throughout the gaming industry for its complete design flexibility. It can produce touch sensors and screens to the exact specification required without minimum order quantities. The new Zytronic ZXY500 touch controllers allow touch sensors to be designed with substantially reduced non-active borders. For example, a 55” diagonal touch sensor can now be designed with sub 10mm borders.

Commenting Ian Crosby, sales and marketing director said, “Console design is about improving the player experience, and our new controllers allows designers to create interfaces that are more exciting and more capable than ever before. The new generation of ZXY500 touch controllers is easier to integrate into a system, and enables a faster, more responsive interface. In addition, we’re helping designers integrate new functions into the console.”

The ZXY500 can support up to 80 simultaneous touches enabling true multi-user interactivity and the implementation of improved palm rejection functionality. It also features increased speed, updating touch co-ordinates in just 1ms at the controller output, reducing touch latency by a third compared to previous generation controllers. Each channel on the device can be configured via firmware to operate in transmit or receive mode. This feature further enhances performance in applications where touchscreens of unusual aspect ratios are used.

Designed specifically for use with Zytronic touch sensors, the ZXY500 achieves exceptional performance and noise immunity on displays from 5” to around 86” diagonal, thanks to its class leading 40V on-board drive signal coupled with new proprietary touch sensing algorithms. Because of its excellent noise immunity, the ZXY500 allows the air gap between the display and the sensor to be decreased, reducing optical parallax and improving the appearance of the display. It can reliably detect touches through over 8mm of overlaying cover glass, even with gloved hands and is unaffected by contaminants on the surface of the touch sensor, making it ideal for outdoor and unattended installations.

Despite the high drive signal, the controller and touch sensor together can be powered from a 5V USB port, eliminating the need for a separate power supply. The ZXY500 is offered with USB output as standard, but also has options to add RS232, I2C, SPI and interfaces, to simplify system integration. They are also much smaller than previous Zytronic controllers. For example, the smallest controller in the new ZXY500 controller family is just 61 x 64mm. The flexible printed circuits (FPC) connecting the touch sensors to the new controllers have also been reduced to just 120mm in length, further helping to achieve a compact overall touch system design.

The new controllers have been designed to be HID (Human Interface Device) compliant and offer ‘plug-and-play’ operation with later Windows operating systems, and also support the latest Linux and Android versions designed for multi-touch. All settings including calibration data can be stored in non-volatile memory on-board the controller, so that once an initial touchscreen (“golden unit”) has been optimally set up, these settings can be copied directly into firmware and used to configure further interfaces in production without the need to repeat the set-up and calibration process.

The exceptional performance and functionality of the controller results from the unique ASIC (Application Specific Integrated Circuit), a custom chip created by Zytronic specifically for the ZXY500 family. Zytronic invested over $1 million in the development of the new ASIC, which has enabled a reduction in the cost and size of the controller and the elimination of much of the obsolescence risk associated with the use of third-party components for core parts of the design. The new ASIC’s are also available together with a STM 32-bit ARM Cortex microprocessor loaded with Zytronic’s proprietary touch detection algorithms as a ‘chip set’. Customers who sign a special licence agreement may then be supplied with the core chip set together with the controller schematics and bill-of-materials. Zytronic’s engineers will then work with the client to design the ZXY500 controller directly onto a mother board within their device or system, further reducing cost and conserving valuable space.